Rookies in the Wild: Fear and Gloaming on the Pacific Crest Trail by John Riha 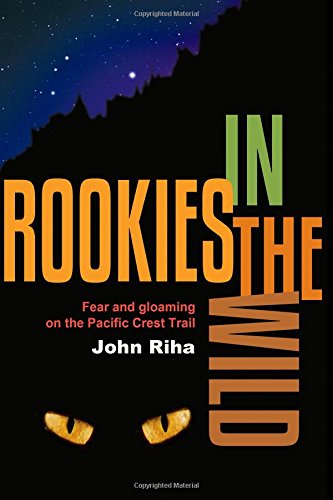 John Riha, with a bum knee and a whole lot of money, decides to take a hiking adventure with his teenage son. But where to? Popularized by Cheryl Strayed’s Wild (although this isn’t mentioned in Rookies), John Riha chooses the immense and immensely grand Pacific Crest Trail (PCT). In his book, Rookies in the Wild: Fear and Gloaming on the Pacific Crest Trail, Riha takes on fear and adventure with a couple of laughs thrown in. After getting laid off from his long-time job, Riha prepares for the hike. However, dancing visions of phobias, doubt, and the fear of man-hungry cougars fill is head. But ultimately, Riha and his son make it to the PCT at the Trinity Alps Wilderness in Northern California.

The second half of the book is much better than the first. It isn’t until page 92, more than halfway through, when Riha and his son finally step foot onto the Pacific Crest Trail. Nearly all of the first half of the book focuses on Riha’s consistent paranoia and fears, as well as a listing of what he bought for the trip and the price. But a true outdoor enthusiast will gladly read through these pages with the luxury of being able to chuckle at Riha’s cracks every now and then. However, it is the second half of the book, once they arrive at the PCT, that is well worth the read. Riha provides the reader with historical information and eloquent imagery of the trail and scenery. Given how much Riha builds the trip up in his mind and in the book, it’s more than a let down when the hike ends up being a five-day excursion. True, hiking in the wilderness for five days is no small feat, but the synopsis and title makes you expect a little bit more.

While not as funny as Bill Bryson’s A Walk In the Woods nor as absorbing as Cheryl Strayed’s Wild, John Riha still provides the hiking enthusiast with a good book with Rookies in the Wild. A quick read, this book will give you a chuckle or two and a yearning to hit the trail.