Stephen King Films FAQ: All That’s Left To Know About the King of Horror on Film by Scott Von Doviak 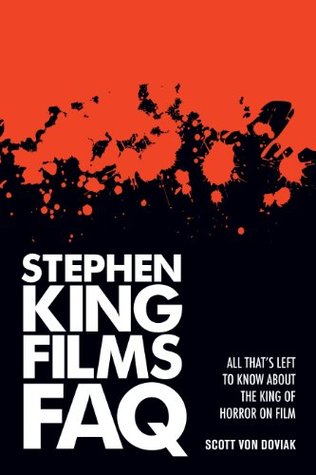 Probably the most famous horror writer since Poe, Stephen King has left a lasting legacy and has entertained and frightened millions. One might not like horror fiction, but one cannot help but acknowledge that it is a stopping point for the young and a place for which we might occasionally be in the mood. One also cannot escape the fact that it has the potential to be a catalyst for social change if it is not all about retribution. The stories are not just about fright, but also a desire to know the real world better and fight our fears. There is so much available from King, and much to be stolen, distorted, exploited and honored.

Making a sequel to a movie in which the title character (and almost everyone else) died at the end might seem a daunting proposition, but if there is potential money to be made, Hollywood can always find a way.

Stephen King Films FAQ is a fascinating documentation of his phenomenal success in both film, television and sometimes on the page. The book tells the longer story of the roots of the horror genre that inspired King and where he went in it. Author Scott Von Doviak has great skill at turning a phrase and is candid, but sometimes the prose can be a bit lurid. The story of King’s success in the visual medium is discussed here in great detail, telling a tale that is central to the understanding of the genre.