The Experiment of Dreams by Brandon Zenner 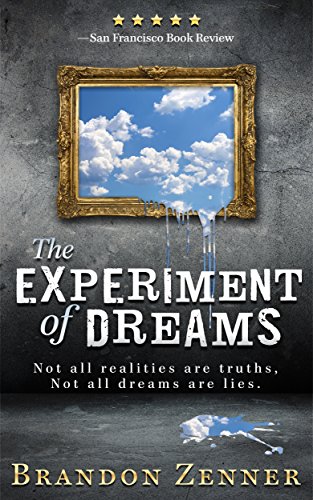 Ben Walker’s life is a mess:  heartbroken over the death of his wife Emily, he merely exists. He works part-time in a bar, makes extra money being a subject of sleep and dream experiments at the local hospital, and drinks himself into numbness the rest of the time. When the opportunity to participate in a new dream study arises – complete with hefty paycheck – Ben knows that he cannot refuse. His participation in the study opens up a whole new world as he is sent around Europe to study art for the study. Ben meets a beautiful woman named Sophia who is the only person he’s been interested in since the death of his wife and starts to feel happy. Things, however, are too good to be true and soon Ben finds himself having reactions to the drug given to him in the study. He soon cannot tell the difference between his dreams and reality – additionally, he is picking up on the dreams of others.  Soon Kalispell has declared the experiment a success and Ben must work on figuring out what the true reality is before he is eliminated along with the research.

The Experiment of Dreams is a novel by author Brandon Zenner and it is an interesting one. The idea of having dream experiments in which the dream can come to life is intriguing and the author expands on that throughout the book. The experiment becomes more harrowing, disturbing, and dangerous as the novel progresses. Benjamin is a strong main character and well written. He is relatable, sympathetic and endearing. The supporting characters are not quite as strongly written but serve their purpose for the overall plot well enough. The plot itself progresses nicely, unveiling pieces of information logically. The only area where the book lagged was in the review of Mr. Kalispell meeting his two henchmen – that section of the book wasn’t necessary for the overall story. The conclusion of the book is satisfying. Overall, this was a solid thriller that kept the reader interested with it’s characters, settings, and creepy dream experiments.  Fans of thrillers and mysteries will enjoy The Experiment of Dreams.