The Severed Streets by Paul Cornell 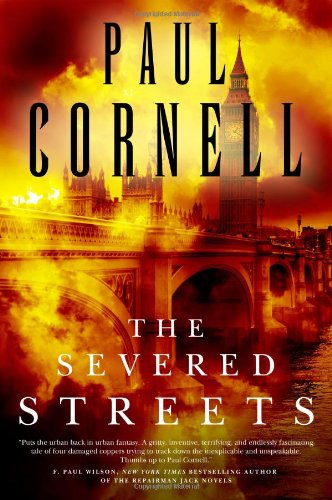 In The Severed Streets, Paul Cornell’s follow-up to London Falling, James Quill and his team are dragged into a high-profile case. Amidst the growing protests, a high-ranking political figure is killed, and only Quill’s team with their gift of sight can see the hidden details of the case. The manner of death is eerily similar to the age-old Jack the Ripper killings, and a note scrawled across the wall at a second murder suggests that Jack is back, but this time is now killing rich and powerful white males. Quill and his team must dive deep into the occult underworld to search for clues, but the strain on them grows and their investigation makes them targets, which may cost them one of their own.

The Severed Streets began with promise; the premise of a secret spook squad that can sniff out the strange parts of unusual crimes was intriguing. However, the characters never developed enough to emerge from the page as individuals. It is difficult to connect with any of the characters, despite their hardships. Another problem with the book was that characters are new to their abilities and never seem to get a grasp on what they are capable of. They are unable to find anyone able or willing to teach them, nor are they able to discover any sort of guiding text, which leaves them bumbling around in the dark. Unfortunately this removes any sense of agency in the book, as the narrative itself bumbles around from one conveniently located plot point to the next as the characters just happen to be in the right place at the right time again and again.

Overall, The Severed Streets attempts to be both a supernatural intrigue and a mystery thriller, but is unable to hold up either aspect. The supernatural is left vague and confusing to both the characters and the readers, and the mystery aspect failed as the detectives rarely did any detective work but rather lucked into the information they needed out of left field. This is a book that die-hard fans of the first novel might enjoy, but anyone interested in a character-driven spooky mystery may want to look elsewhere.