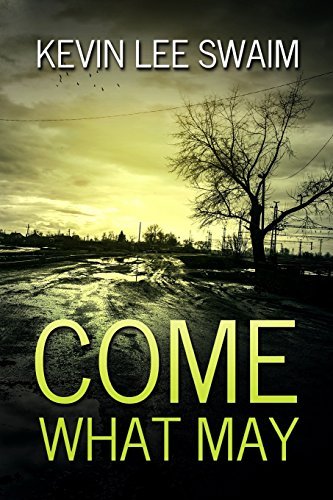 Sam Fisher is just a normal guy leading a normal life. He’s young, has a beautiful wife and daughter, and works in the diner that he inherited from his father. While business at the diner isn’t what it was in his childhood, and while his town may be slowly dying, Sam is a pretty happy guy overall, contented with his position in life and the well-established routine of his days. That is, until a strange, menacing couple comes into his diner and, while they leave only strange, greasy, putrid-smelling ashes and overturned tables in their wake, Sam’s life will never be the same. The couple, it turns out, were vampires, and Sam and his family have been targeted. Sam’s wife ends up killed, transformed from mortal into an immoral bloodsucker, and their daughter is abducted.

Kevin Lee Swaim’s Come What May (A Sam Harlan Novel Book 1) tells Sam’s story, following him on his journey of discovery, from an unbelieving small town boy who is content with his relatively mundane life, to a man on a journey to try to save his daughter from the clutches of his now undead wife, who is lustily sustaining herself on the blood of her own child. With the aid of vampire hunter Jack Harlan, Sam faces off against a variety of vampires and meets other magical creatures on the way, transforming his perspective.

This book is more than just a vampire story. Swaim has used the vampire/horror genre to create this finely tuned Bildungsroman, allowing us to join Sam on his journey of awakening and self-discovery. But Come What May is also a damn good, complex, and sufficiently creepy vampire story. Swaim’s level of writing is rare in the world of self-published novels, and this story largely avoids the clichés that can bog down similar tales. Sam’s world, as imagined by Swaim, is complex and engaging – a world worth learning more about in future novels.