Cover Him With Darkness: A Romance 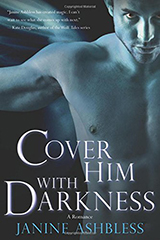 In the deep, dark cavern under Milja’s home in Montenegro, a beautiful man is chained naked to a rock slab. Her father, an orthodox priest, tells Milja that it is her family’s duty to keep the man bound there forever, but she doesn’t know why…and can’t help her infatuation with the silent, scarred immortal. When her father discovers Milja’s weakness, she is sent away, only to return when he grows ill several years later. With her father away, Milja releases the prisoner who has forever haunted her dreams.

Cover Him With Darkness is uncommonly literary in tone and original in ideas. Janine Ashbless brings to the tired paranormal genre an exhilarating world wherein the creatures of Judeo-Christian faith are brought to life and written into contemporary times. This new world, which Milja has lived her entire life without really seeing, is both seductive and horrifying. No longer innocent, Milja will survive her brutal awakening, but the author offers no reassurances for Milja’s future with Azazel, or for the future of humanity. Sexy, dark, and suspenseful, Cover Him With Darkness is a superbly creative story that is just impossible to put down.