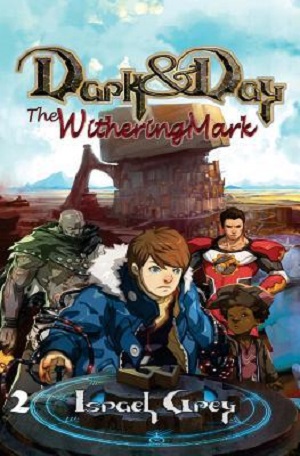 Sci-fi fantasy fans have been certainly captivated by Jonothon Wyer, a cute hero of the first book in Israel Grey’s Dark & Day series. Jono is an adorable boy who has saved the world from destruction by stopping the war between Dark and Day Ends of the Earth. However, in the second book, The Withering Mark you’ll find that two years later practically no one remembers it. For all the people it’s not Jono, but mysterious Jason Wheat who prevented the war plotted by Tombs, a cruel terrorist’s organization. A little disappointed but not much envious, thirteen-years-old Jono enjoys his practically anonymous life at the Windom Academy. Rapt by tales about legendary hero Illius, he dreams of having his own adventures. Jono’s health problems have been solved and he eagerly explores Eies, the magnificent capital of the Dark End of the Earth and its surroundings. Life has changed on the both sides of the Earth, but after years of hatred there is still fear and a lot of suspicion between the two Ends. To build a more trustful relationship a World Faire is organized on the Day End.

“It is easier to destroy, easy to create fear. No one believes what they believe without cause or reason. But it is far harder to build and create trust.”

Jono is convinced that Tombs would try to sabotage it, but when and how? Is there any hope for the world? As it is known, reality and legends often intertwine and any myth has a truth behind it. Are Jono and his friends capable to prevent another myth based Tombs’ destructive conspiracy? The Withering Mark has its own unique plot, though it’s not necessary (but recommended) to be acquainted with the previous book. Its original interesting twists and an appropriate for characters’ age language and sense of humor makes it a very pleasurable read. Also, this book has a bunch of new wonderful illustrations as well as fewer typos than the first one. Jono’s adventures continue and the readers may expect that more intriguing details about Dark and Day’s traditions, holidays, games and fantastical mythology and history are awaiting them in the next Grey’s book The Angels’ Masquerade.