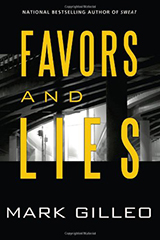 Enigmatic private investigator Dan Lord’s life is business as usual – which is to say, very unusual – until two of his close family members are killed in the same night. Their deaths are ruled suicides, but Dan isn’t convinced. When the detective investigating the case is added to the rapidly growing body count, Dan knows something bigger and more sinister than he ever expected is at play. With the help of his bright new intern Sue, who takes to PI life like a duck to water, Dan sets out to call in every favor he’s owed and then some to solve the deadly mystery.

Set in Virginia on the edge of the nation’s capital, Favors and Lies has plenty of opportunity to call in a colorful cast that includes spies, misfit techies and high-class madams. Sue Fine, the plucky intern full of secrets, could have been introduced earlier in the story and as such her plot line feels a little tacked-on. Likewise, the big reveal comes from just a hair too far out of left field and happens so close to the end of the book it feels like readers are being prepped for a sequel in lieu of a denouement. On the whole, however, Mark Gilleo’s writing is quick and engaging, and the action never drags. Favors and Lies is a solid detective novel and should Dan and Sue continue their adventures where they left off, it’s sure to be another page-turner.