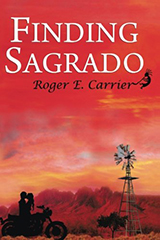 Finding Sagrado is coming-of-age story about how Shane Russell, a privileged kid from Michigan, runs away from his hometown in search of meaning, personal values, and a way to get beyond the death of his father in Vietnam. “Sagrado” is the fictional town that Shane sets out to recreate – an ideal that he sets out to discover, all while learning much about himself too. Inspired by Richard Branford’s novel Red Sky at Morning, when Shane sets out he is following his heart toward recreating Branford’s town. Shane discovers that he has held subconscious prejudices; Carrier’s mentioning of various traditions and customs of Native American people-groups shows how Shane is opened up to a beautiful and mysterious world he’s never known. The book is a mixture of immaturity, first sexual encounters, and deep questionings of God and self. In the end, Shane learns that he has the ability to direct and craft his own story.

“The next day before dawn, he did something to close the cover of Red Sky at Morning… He ambled toward the windmill…he grabbed hold of the frame and worked his way up until he stood beside the paddle wheel… Twenty minutes later as the sky came alive in shades of red, he took a steadying breath… It was, he knew, a goodbye to a great man and an end to his grief.”

The experiences that Carrier takes the youthful Shane through are realistic and heavy, though without bordering upon melodrama. Shane is a young kid with angst and a heavy heart for something that makes sense in the world. Carrier does a great job capturing what it’s like to be seventeen and clueless as to what to do after high school. Though often detailed excessively, the reader is not left devoid of his own imagination. Quite the contrary – Carrier’s descriptions of the vast American backyard are Steinbeck-esque in their thorough, yet simple detail. While the author sets out to write a teen-novel, it probably falls more appropriately under the young adult heading; this novel is not for young eyes. It is real, it is raw, and yet, it is honest and worth anyone’s time to read.