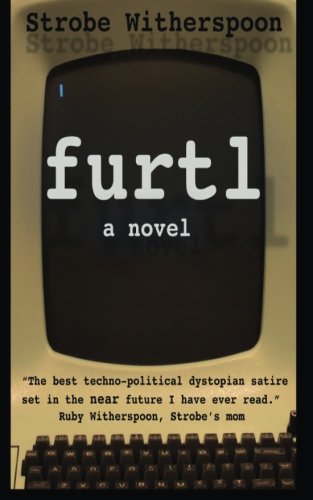 Manny Kahn’s company Furtl is headed in a downward spiral.  The technology he created for the company is rapidly becoming obsolete and is about to be replaced by new tech out of China. After taking a stand against selling user information to save the company, Manny is blackmailed and forced out of the company he helped create. Manny decides that technology has ruined his life and chooses to live off the grid, essentially dissapearing. He resurfaces years later when he realizes that he can’t live with his company’s sins and returns, determined to take on the company he was forced to leave behind. Manny realizes that to save himself and his country, he must take down the thing that once meant the world to him.

Furtl is a novel by author Strobe Witherspoon that blends elements of political thriller with the dystopian genre. The results are mixed. Furtl has some interesting elements including the themes of the increased reliance of society on technology and the governmental and societal changes that arise as a result. Additionally, the selling (and targeted police use) of private information lends itself well to creating an atmosphere of fear and paranoia in the new United States. Manny’s personal journey is much less interesting. Manny isn’t a particularly noteworthy or endearing hero. He is oddly naïve and trusting, and believes people’s words rather than their actions. This is highlighted when Manny falls in with a group of renegades who do horrible things in order to take down the current regime. Manny disagrees with their actions but doesn’t leave the group or work to make changes. He tends to let things happen to him rather than making active decisions in his life. The plot also drags in parts and the conclusion of the book is overly convenient. Overall the book has some interesting themes and scenes but  gets bogged down by it’s main character and plot.