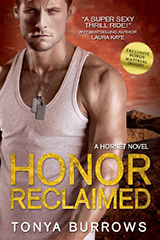 In the mountains of Afghanistan, a hostile situation goes FUBAR when covert operative Sergeant Zak Hendricks is identified and captured by the group he was commanded to infiltrate. The US government writes Hendricks off, forcing his commander to turn to HORNET, a private hostage recovery team made up of former military and government agency tough guys.

New to HORNET, Seth Harlan has everything to prove – not only to his teammates, who doubt his capabilities, but to himself as well. Seth knows too well what happens to prisoners of war in Afghanistan, and has been struggling with PTSD since his entire team was killed in action.

Arriving in Kabul, Seth meets a woman named Phoebe Leighton a photojournalist with distracting red hair and closely held secrets. Phoebe recognizes Seth from the media reports of his rescue, and hopes he never learns of the malicious articles she regrets writing about him. Drawn together by rumors of a suitcase nuke held by a local militant, Seth must trust Phoebe despite the secrets he knows she is keeping. When he struggles with crowds, abrupt noises, and the pain of his own memories, only Phoebe gives him the focus and confidence he needs to bring Sergeant Hendricks home. The situation is more deadly than HORNET bargained for, but for Seth the real danger lies in trusting Phoebe with his heart.

Following last year’s SEAL of Honor, Tonya Burrows’ HORNET series continues with Honor Reclaimed, a redemption story with powerful emotional resonance. The author’s depiction of PTSD is heartrending; the agony of Seth’s past trauma rivals the pain of his hope for a future he craves, but can’t believe he deserves. Just as Seth has been punishing himself for his perceived failures, Phoebe has rewritten her life in order to atone for her callous treatment of a wounded hero. For both of these characters, trust and redemption go hand in hand. A decided improvement over the so-so series opener, Honor Reclaimed fully delivers on its promise of racing pulses and wrenching emotion.