In Praise of The Grotesque

In Praise of The Grotesque
By Paula Treick DeBoard

Lately, I’ve been thinking about Flannery O’Connor – or at least, her characters. She was known for her “grotesques,” the oddball casts of characters who populated her stories. They were grotesque because they were damaged, yet somehow they were neither tragic nor pitiful. Their “flaws” felt real on a deep, human, elemental level. 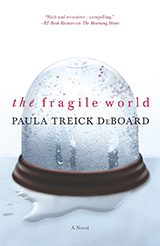 O’Connor saw the ability to create such characters as inextricably linked with her southern-ness. “Whenever I’m asked why Southern writers particularly have a penchant for writing about freaks, I say it is because we are still able to recognize one,” she wrote in “Some Aspects of the Grotesque in Southern Fiction.” She continued: “To be able to recognize a freak, you have to have some conception of the whole man…”

There’s more, and it’s all worth reading – but lately my mind has snagged on this idea. When O’Connor mentioned freaks, she wasn’t talking about circus sideshow attractions; she wasn’t thinking about vampires or werewolves or half-human/half-gnats. What she meant was even more unsettling: the “grotesque” in all of us.

Recently, a friend and I were discussing a book we’d both read – its plot, its setting, its big idea. And then it happened: I couldn’t recall anything about the main character, other than her name and the vaguest of physical descriptions. It was tempting to blame this on factors in my own life – the focus on my own writing, the distractions of day-to-day busyness, the increased amounts of random data Buzzfeed and Pulptastic insist on hurling at my brain or – hopefully not – the signs of early memory loss. But I suspect something else is at work.

Lately, commercial fiction has served me far too many cookie cutter characters. Witness the phenomena of the female romantic lead: a woman who is stunningly beautiful yet somehow lacks confidence in her physical appearance. (Family and friends might even wring their hands because she is “too thin” – frankly, nothing that can’t be solved by a few packs of Costco muffins.) Then there’s the homicide detective, who falls into one of two molds: a father gunned down on his beat or a mother’s unsolved murder. It’s possible for me to fly through these pages without thinking too much or caring too deeply about the characters. It’s like a sugar high: brief euphoria followed by sudden emptiness.

Two days later, I’ll be lucky to remember their names.

Which brings me back to O’Connor – a writer I encountered more than 20 years ago and still return to regularly, for a dose of fully blemished reality. O’Connor’s characters were inseparable from their grotesqueness; their flaws were deeply ingrained, like deficiencies at the cellular level. Take the character of Manley Pointer in “Good Country People” – a traveling Bible salesman/con artist who filches the wooden leg of the girl he has seduced, then confesses offhandedly that he once got a glass eye the same way. For that matter, the girl herself is wonderfully complicated – she has changed her name from “Joy” to the unlovely “Hulga,” she holds a Ph.D. in philosophy but behaves like a child, and due to a heart condition, she is not expected to live past forty. O’Connor describes Hulga as living in a state of “constant outrage.”

Now these people I remember.

Sure, fiction has a lot to do with escapism, and maybe readers want to dodge the heart conditions and wooden legs, the muffin tops and uneven teeth. Maybe we don’t read to encounter inadequacy or solutions that don’t come easily – since these are, after all, some of the uncomfortable facets of real life.

But these days – the cookie-cutter just isn’t resonating with me. And so, I have a new list of wants, a Character Manifesto, if you will.

Writers: Give us your tired, your poor, your complex characters yearning to break free. Lose the “charming”; serve us instead flaws deep as bone marrow. Resist the urge to airbrush into perfection; allow us to fall in love with unpleasant truths. And above all, keep digging down to that elemental level, where lives the freak within.

Now these are characters I can’t wait to meet.

Paula Treick DeBoard is the author of The Fragile World and The Mourning Hours and a composition instructor at San Joaquin-Delta Community College. She lives in Northern California with her husband and their four-legged brood.