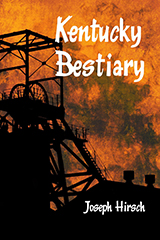 Corporal Peter Silone takes on a new position and moves from Cincinnati to Gilchrist, a small town in the eastern Kentucky Appalachian. His uncle Jerry, a former mine worker and Vietnam vet, is one of numerous reasons for this relocation. Pete is also looking for a less stressful life. However, in a small city every policeman should be a one-man traffic, homicide, missing person, drug, sex, arson and other crimes cop. And Pete is a “lucky” guy: in his first few days in Gilchrist he has to deal practically with all of them and with the city’s biggest problem, the meth. Yet, the city’s police station is very well equipped thanks to a strange billionaire Rufus Petulengro who conducts some research in abandoned mines and plays chess with Pete’s uncle.

As it’s probably usual for rural areas, many of the city residents believe that mysterious evil creatures hidden in the old coalmines’ tunnels are responsible for a large part of local tragedies. Pete, influenced by all these events and overwhelmed with tragic memories of the death of his younger brother from drug overdose, has nightmarish dreams and some kind of prophetic hallucinations where some of these monstrous creatures appear. Lured by old legends and curious about the billionaire’s doings Pete is going to explore mine’s tunnels. What evil would he find here?

Since the hints on existence of some supernatural powers start from the beginning of the narrative the turn from a simple crime story to the mystery may be a little odd, but isn’t surprising. Such twist intertwines well with the general storyline. The book’s often dirty, unpleasant, horrid but vivid descriptions of different unusual characters and scenery make it an interesting read. According to Merriam-Webster dictionary “Bestiary” is an unusual or whimsical collection, a medieval allegorical or moralizing work on the appearance and habits of real or imaginary animals, or an array of real humans or literary characters often having symbolic significance and Kentucky Bestiary by Joseph Hirsch matches this definition precisely.