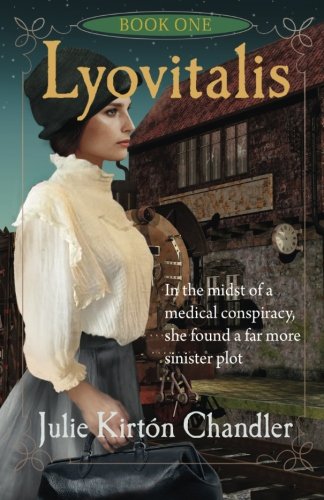 Lyovitalis is a novel predicated on a lie. In the midst of World War I, physician Audrianna Foster travels to Europe to continue her late father’s research into a mysterious – and deadly – disease known as Lyovitalis, a disease that he believed killed Audrianna’s mother. Never close to her father, Audrianna nevertheless decides to fulfill his wish. However, her trip takes a surprising turn when she is accosted by a beautiful young man who takes her to tend to his gravely injured (German) comrade. In spite of the near abduction and dire circumstances, Audrianna finds herself intensely drawn to this young man with powerful, unnatural green eyes. Lust invades her – and, more than that, love overtakes her.

This young man can find his way into Audrianna’s dreams, where all is safe, where they can have a perfect (and carnal) union that feels so real. Then, long story short, this beautiful young man ends up, in fact, being a gorgeous and seductive young woman – and Audrianna’s infatuation does not stop. It is just a little complicated. Especially when she realizes that this woman, Lorna, and her family, the von Traugotts, are not quite what they seem. Not only are they imbued with mysterious sexual powers against which others have no defense, they have unnaturally green eyes, eyes that shift color depending on mood, on energy, eyes that are more telling than they may want. They almost seem inhuman. And maybe they are.

Lyovitalis is an interesting book with an interesting theme – and also with surprisingly graphic lesbian sex scenes! – but there are some shortcomings. For instance, at once point Audrianna refers to herself as “bipolar,” a diagnosis that did not yet exist in the period during which the novel takes place. Additionally, the attraction and instantaneous love that exists between Audrianna and Lorna doesn’t ring true to life and, in spite of the far-fetched nature of the novel, it detracts from the power of their romance, their love. The novel, while largely well-written, needs some help with continuity and pacing. Also, some of the sex is quite jarring in its graphicness, which occasionally seems out of place. But overall, author Julie Kirtón Chandler has crafted an interesting and imaginative novel about love, sex, and a boring little thing called the supernatural.