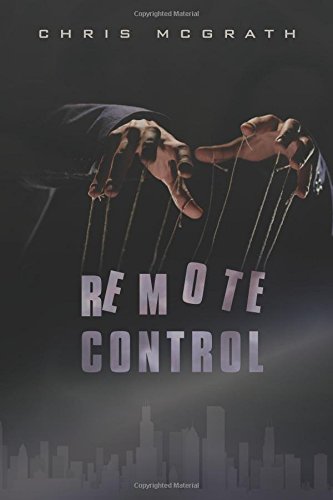 Chris McGrath’s Remote Control is the story of Sean McKenna, an aging rogue who wants desperately to put the secret agent life behind him and settle down with Faith, the archaeology professor of his dreams. Unfortunately, one of Faith’s colleagues entrusts Sean with a priceless, irreplaceable manuscript that an ancient shadow organization is more than willing to kill for. Faith and Sean are thrown headlong into a quest to unravel the mystery before time runs out.

What starts out as a decent political thriller with a religious bent gets very quickly played out. Sean, a mid-fifties womanizer with rakish good looks and a tiresome billionaire-retired-soldier-turned-international-super-spy job description, and his hyper intelligent voluptuous sex-bomb girlfriend are looking for the Holy Grail. In case the constant, outdated references to Dan Brown’s 2003 novel The DaVinci Code don’t tip the hand for you, this refers to the bloodline and living descendants of Christ, who have been recording their history since the crucifixion in manuscripts like the one Sean is given.

The story has potential, particularly with regard to its treatment of an accessible, loving God and Jesus as a mortal man, but that gets lost almost immediately. The writing is plagued with technical mistakes and inconsistencies; of particular frustration is the treatment of the female characters, for whom the laws of physics and biology don’t seem to apply. Faith, at 38, apparently still possesses the body of a teenage daydream and at 5’4” manages to stand “a head taller” than the 5’3” middle-aged mother still sporting the body of a gymnast. Throw in a painfully loose understanding of Google and contemporary internet security, and the whole thing just becomes difficult to read.

Despite a promising start, Remote Control soon loses momentum, and the technical deficiencies and poor character development are hard to look past. If the plot summary doesn’t fill an entertainment niche for you, consider skipping this one.