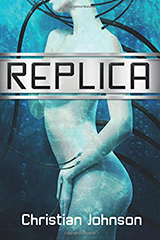 When Veronica Blake wakes up in a cloning tank, she has no idea how she got there. As a high level agent at the Cyber Defense Agency, Veronica has a clone in case she dies – the problem is, she didn’t die. Escaping the facility she is soon caught by the CIA and discovers the real reason for her clone activation: they need her to hack the computer systems of a crime syndicate and can’t ask the real Veronica because she is working with them. Given the choice of cooperation of death, Veronica reluctantly agrees to help. Working with a small team she doesn’t trust, she must work on not only hacking into the computer system but finding a way out for herself.

Replica is a fantastic sci-fi novel by author Christian Johnson. In the book, he combines solid elements of science fiction with action. The book is fast-paced and the reader feels the urgency of Veronica’s situation with the pacing. The character of Veronica is very well written:  she is smart, capable and determined. She doesn’t back down on her goals or devolve into a woman who needs to be saved by someone else – she is her own savior. The plot of the book unfolds in a logical and interesting way – particularly around the hacking job with the CIA. Plot twists, while not necessarily surprising, are revealed in ways that feel fresh. The supporting characters also nicely written and help move the plot along. Particularly noteworthy is the character of Ryn, who is successful as an uber-creepy predator agent on the CAI team. The character of Michael – Veronica’s ex-boyfriend and CDA agent working with the CAI group – is a nice addition as the only link to Veronica’s past. Overll, Replica is a wonderful and thrilling sci-fi novel that is full of fun twists and turns. Sci-fi fans will want to read this book.