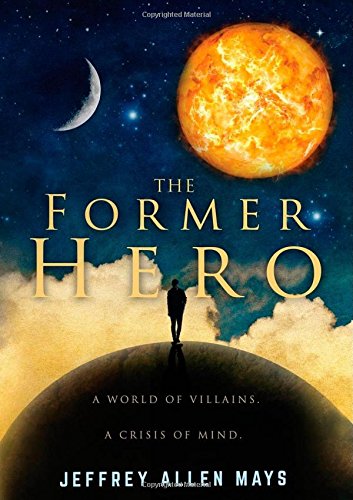 The Former Hero is an ambitious and philosophical novel that looks at the concept of a “hero” while following three protagonists are caught in an overwhelmingly corrupt city.  Mary, mother of young Penny wakes up after an alcohol binge to discover that her daughter is missing. In desperation she takes to the streets, begrudgingly enlisting the biker Angus to help her. Lt. McCarthy is the final holdout of a corrupt institution. He spends his days digging through the old city records, believing that the root of the city’s corruption can be pieced together if only he can live long enough to find it. Omni-man, the once great defender of the city, languishes in a hospital desperately hoping the doctors can give him back the powers that were so cruelly ripped from him by Knox’s evil regime. These three characters find themselves drawn together, each one looking for a hero in terrible times.

“What we need is a real, fantasy-style, comic book hero. But there isn’t one. The villains are certainly real. There is overwhelming evil, so strong and pervasive and ubiquitous, but no overwhelming good.”

The Former Hero is a somewhat complicated novel. The three main story lines weave in and out, leading the reader to quickly learns that things aren’t necessarily as they seem, and that each of the characters are hiding something. The characters are well developed and are easy to care about, even though you may not like them. The narratives themselves roam from the present, to the past. This is particularly the case with Lt. McCarthy, as he pieces together the history from the early days of the town.

Jeffrey Allen Mays did something different with The Former Hero by creating a bleak world where people long for a hero, but are instead overrun with villains. This allows for an extended study on why humans feel they need heroes, and what exactly that might mean. Much of the book is philosophical in nature as the characters wrestle with their past, and present circumstances, so readers interested in a quick, easy read might want to look elsewhere. For readers looking for a bit more depth to their novels, this book might be just up your alley.