The Record of the Saints Caliber by M. David White 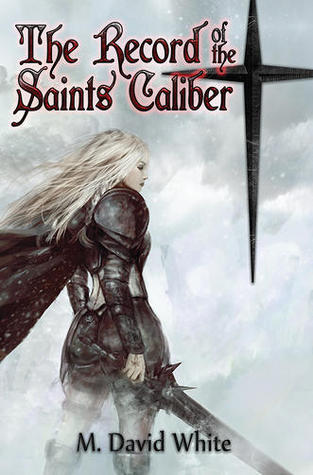 The Kingdom of Jerusa is in disarray. The king continues to raise taxes for a war no one remembers starting. Mothers starve in the streets, leaving their children to die scared and alone or to be dragged off to be sold into slavery. The Saints Caliber – supernaturally powered warriors whose very armor will consume them if they lose the will the wear it – have become nothing more than killing machines in the service of the crown. This is the setting of The Record of the Saints Caliber.

It is into this setting that author M. David White lets loose a diverse set of characters to form the first book in a planned series. Most important among them is Nuriel (an elite Saints Caliber who struggles with her given mission to murder innocents in the name of the king), but every character has something to recommend them, and there is never that groaning moment – always feared with a wide cast – when you come to a character you don’t want to read about. Such characters don’t exist in Saints Caliber.

Unfortunately, despite the strong cast, too often the book’s style outweighs its substance.

For instance, part of Nuriel’s story is how she becomes addicted to a fantasy opiate called Ev in order to cope with the atrocities she is asked to commit. This proves to be a fantastic entry point into the character’s struggle. As she becomes more and more tolerant of the drug, the need for just one more shot becomes the need for two more shots and then three. When she is sent to quell a civilian rebellion made up of starving peasants and children, Nuriel’s delicate emotional state seems to be coming to a head, and the reader will be caught up in the moment wondering how she will handle it… until she suddenly encounters her general, who is a behemoth monster of a man (and actually named Behemoth) who screams in all-caps his opinion of Nuriel’s sexual parts, what he wants to do to them, and how much he likes the butts of young boys and the smell of blood (spoiler: he likes them a lot).

That such an important moment concludes with such a shallow encounter is just one example of how the writing of Saints Caliber does not live up to the plot. The book is long at six hundred and fifty pages, and much of it seems erroneous, with information often being repeated two or three times. Some particularly egregious areas will have a character think about something, say that exact thing out loud to someone standing next to them, and then internally consider the information again.

And, yes, there’s sex. But those who were hoping for some titillation will be as disappointed as those who want nothing to do with it. Two of the main characters are raped by chapter six. There is a scene where a man’s genitals are cut off and someone else is told to “pleasure” the hole with their finger. There is a scene where a man takes a dismembered head, knocks out the teeth, and then does things to the gaping, bloody mouth that are best not described here.

Things like this make it difficult to find an appropriate audience to recommend Saints Caliber. Fantasy lovers looking for a dark, gritty tale will be disappointed by the immature character interactions, but people looking for lighter reading will find the detailed sex and violence to be too much. This leaves Saints Caliber as a curiosity, the midnight slasher flick remembered briefly for its gore, but ultimately forgotten because it has no message to deliver.