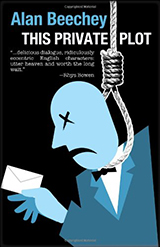 Murder Mystery in the English Countryside with Quirky and Hilarious Twists

Author Alan Beechey manages to grab the reader with the first paragraph, which finds Oliver Swithin running naked with his girlfriend at night through an English country village while he is remembering trivia about bananas. Oliver, a writer of children’s books, was ordered by his editor to spend time in the countryside to research the animals he writes about. Though Oliver limits his visits to his parents to a few times a year, he is staying in their village home for the assignment. The midnight run was instigated by a tale dreamed up by his mischievous younger brother. However, when Oliver and his girlfriend Effie reach the village square, they discover a body hanging in an ancient oak tree.

There is so much to love about this book besides the actual murder mystery. It is filled with hilarity, bits of interesting trivia, some Shakespearean history, and romance. The characters are beguiling and the plot intriguing.