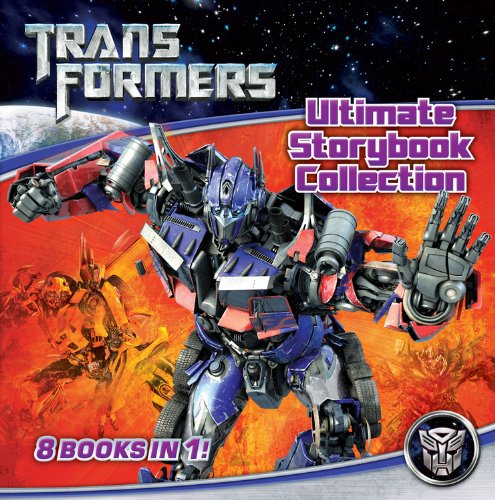 Do you root for the Autobots or the Decepticons? Who is your favorite Transformer? Don’t worry if it’s too hard to choose! Now you can learn about all of them in Transformers: Ultimate Storybook Collection. The eight stories have a common message – working together builds friendship and trust.

The stories were previously published within the last seven years, but by combining them into one big collection, kids have “eight books in one” at their fingertips. The stories all have a different feel because the authors and illustrators vary and make each adventure unique. The tales are approximately 20 pages long, perfect for picture book readers.

“The car had changed shape. It seemed like it had arms and legs.”

In the story “Sam’s New Car,” a beat-up yellow Camaro with black stripes catches Sam’s eye on a used car lot. Little does he know, he’s actually considering buying a walking, talking, giant alien robot named Bumblebee! Sam is in for some big surprises (including meeting his first Decepticon).

“Optimus Prime Versus Megatron” tells the story of how the war on an alien planet called Cybertron left the Transformers at war with each other ,and now two brothers, Optimus Prime and Megatron, battle each other over Earth’s power.