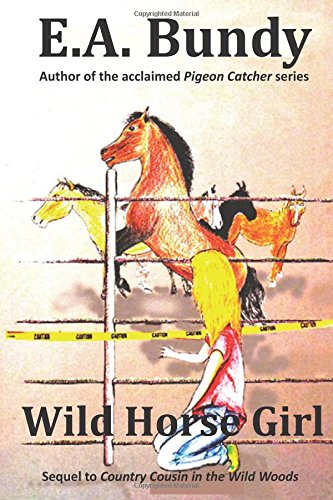 Wild Horse Girl is the story of Jenny Miller, whose family inadvertently adopts Amanda Snickert, their young neighbor. Jenny discovers that Amanda is being abused at home, and when her father is arrested, the Millers take Amanda in. Though the family is relatively unprepared for the challenges of rehabilitating a child who’s been isolated and severely abused, Amanda begins to bond with Jenny. When the Millers buy the little girl a horse to work with as part of her recovery, she finally starts to open up and trust them as her own family.

E.A. Bundy doesn’t shy away from the realities of abuse, and this book definitely won’t be for everyone. Amanda eventually learns that what she’s been subjected to isn’t normal when the other girls her age can’t relate to her fears or experiences, and Jenny is forced to disclose what she’s learned to her parents. The story deals with physical, emotional, and sexual abuse of children, and how kids can begin to heal from horrifying experiences with the right support and a safe space to do so. It’s upsetting to read at times, but the complexities of coping with the unthinkable and finding a way to move on ring true.

Though it offers a realistic picture of both country life in the Columbia Gorge and the horror of child abuse, the book has its problems. Bundy has a habit of introducing information far too late, or as an afterthought, so the reader goes through the story without much context. Jenny’s internal monologue is a bit scattered, and at times I found myself struggling to keep up with where she was at emotionally. Despite that, the characters are all relatable and, with the exception of Amanda’s father, likable. It was refreshing to read a story where almost every character has their heart in the right place even when they’re afraid or mad at each other. By the end of the book I found myself earnestly wondering what will happen to everyone – according to Bundy’s afterword, I won’t have to wait long to find out!