k & Roll (of course), and the Feds (wA Banquet of Consequences: True Life Adventures of Sex (not too much), Drugs (plenty), Rocho invited them?) by Jake Rohrer 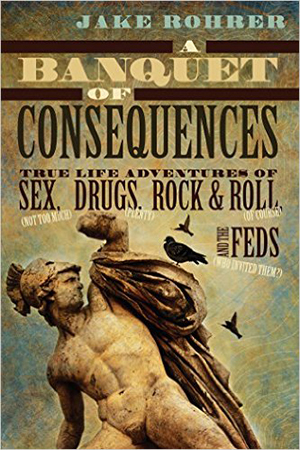 Banquet of Consequences: True Life Adventures of Sex, Drugs, Rock & Roll (Of Course), and the Feds (Who Invented Them?) is Jake Rohrer’s memoir about coming of age in the era of free love and good music. As a young man, Rohrer got involved with high school friend John Fogerty’s fledgling band, The Blue Velvets, which would eventually go on to become Creedence Clearwater Revival. As he gets into life’s adventures, Rohrer runs with increasingly big dogs who play rougher and rougher until finally an acquaintance with less loyalty sells him out to the feds for immunity, and he’s forced to sit down hard.

Rohrer’s collection of life stories are funny and entertaining, but much of his best material is reduced to clipped anecdotes that leaves you wanting much more. The book is structured haphazardly; it starts with his fall from grace and then flashes back to the 70s before starting over at the beginning, and the inconsistent chronology spreads the power of the story thinner than it needs to. Sadly, Rohrer’s time with Creedence is buried in the second chapter and is over almost before it begins, much like the band itself.

Aside from some unfortunate structural issues, Rohrer’s tales have the flair of any good rock and roll memoir. In addition to Creedence, he deals with a huge cast of crazy characters over the course of his wild ride, all of whom contribute to the kind of rowdy lifestyle that eventually lands him in prison. His time at “camp” comprises some of the most interesting parts of the book. Rohrer is able to make the stories of his experiences and the people he encountered there entertaining, but his conclusion is clear: prison sucks. Rohrer was lucky enough to have the resources to get out of that broken system, and his meditation on his own life reflects that.