Blow by Blow: A Quarter-Century of Voices from my Notebook by David Blow 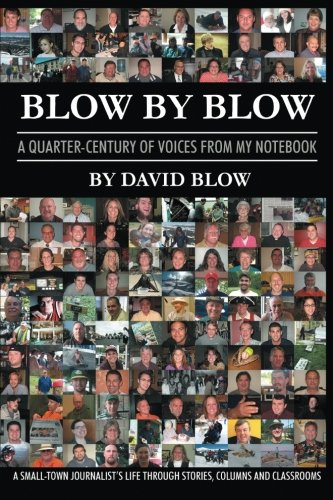 Blow By Blow is the cleverly titled collection of columns and interviews by reporter-turned-professor David Blow that ultimately serve as a kind of memoir, a life story told in small increments over time. The first section of columns, “From The Heart,” establishes Blow’s persona – he’s a man who cares deeply for his family and has great empathy for other’s problems and issues. In the next part of the book, he provides a little backstory for his own life that isn’t apparent in his columns. He tells the story of moving from a small paper to a larger one, meeting his wife, and starting a family. His columns from this time feature some sweet celebrity encounters, including Robert Redford and Jerry Springer. He covers a wide variety of subjects, from an incorrigible neighborhood dog to Community Action, an advocacy group for homeless youth. The Community Action story is one of the longer pieces in the book, and it struck a chord with me; Blow’s compassion for the kids and his reporter’s dedication to his community are apparent, and makes the story incredibly relatable.

The entire collection is interesting to read – there’s not a dud in the bunch – and there’s no need to read it chronologically unless you’re looking to discover Blow’s evolution as a journalist. He also helpfully includes short follow-ups wherever he can, so you’re never left wondering how someone fared or whether their project was a success or not. Chances are you’ve come across one of his stories before; one of his greatest journalistic achievements was sitting in on an interview with one of his students to interview the daughter of Richard Phillips, the man whose ship was taken hostage by Somali pirates, and whose story was turned into a Tom Hanks movie. The student’s stories about the ordeal went national, giving the student newspaper some neat exposure. Overall the book is charming, and even if Blow’s columns never appeared in your local paper, reading them all together brings a feeling of nostalgia for the comforting routine of daily print news.

Q. After so many years of writing, what inspired you to compile this book?

A. I don’t have a bucket list, but I guess if I did, this would be at the top. I wanted to leave something behind, probably to collect dust on bookshelves. Honestly though, I feel a lot of the stories and columns in the book aren’t geographic, but are about real people doing real things that will resonate with a large audience. I also wanted to use some of the proceeds to raise money for the Glens Falls Area Youth Center because as I write in the book, the two men who operate the facility for underprivileged youth are as close to angels on earth as I can envision.

Q. With so many articles under your belt, how were you able to pick and choose which ones were chosen for Blow By Blow?

A. Some were obvious, like brushes with Robert Redford, Ted Turner and Jerry Springer, as were the soul-purging columns detailing the despair of cutting my dad’s finger off with a wood splitter or unsuccessfully trying to get a signed Yankees baseball for a friend’s last birthday days before he died of cancer. But others were just stories that I felt would strike a nerve with people, like the one about inmates at a local state prison who found a new purpose caring for cows when the prison farm opened up, or the above mentioned Youth Center officials who are both in terrible health, but continue to care for local kids whose parents simply don’t. I also had help from one of my students through a grant from Castleton State College where I teach. She got sick one day from too much microfilm work and needed a cracker break.

Q. What’s your favorite subject to write on?

A. I’m not sure I have a favorite subject, really. I like writing about passionate people, whether they are passionate about selling vegetables by the roadside or about playing basketball, like Jimmer Fredette. I found that I packed this book full of passionate people, especially in the Q&A section where I interviewed everyone from senators to a 99-year-old woman whose passion for life was inspiration enough.

Q. How do you feel about using social media in journalism?

A. I believe social media is an amazing tool in journalism these days to get your stories out to a wider audience. Even with the Castleton State College newspaper I advise, when stories hit the paper’s website, we also Facebook and tweet them. These sites are great for comments from readers, which can be almost as interesting as stories. I tell students social media is also great for sources – but to only use it as a means to get in touch with someone – not to quote from posts. That can be sketchy. You don’t know if the person actually posted the comments or not.

A. These days, my writing is relegated to winter recreation columns in the winter, a biweekly Q&A column and the occasional heartfelt column when I get inspired, like when we recently got a dog after years of begging from my daughters. (I caved, selfishly, because before long they’ll be gone and I wanted to be less lonely.) I try to find interesting local people doing interesting things, everything from the guy who scoops up golf balls on a driving range to a guy who gives hot-air balloon flights. I proposed in a balloon, by the way. As for the columns, when my heart loves or aches, these things often pour out of me and as a writer, I guess I always feel the need to share.

Q. When you were a reporter, was there any subject you desperately wanted to cover but never got a chance to?

A. Not really. I covered pretty much everything in my 12 years as a reporter. There were murders, white water derbies, hot air balloon rides, a corruption trial, ski stories and human-interest features, you name it. I mean, I love the Red Sox and being a beat reporter covering the team would have been cool, but I was content. I didn’t even hate going to local government meetings. I’ve always found local government to be more real that state and federal government. It’s neat when you don’t know which party someone represents because they seem to deal with issues and not parties. That’s what I found on the local level.

Q. If you weren’t writing (or teaching college kids to write), what would you be doing? What’s your OTHER dream job?

A. I tell my students a lot that I feel like one of the luckiest guys because honestly, I think I’ve had my two dream jobs. I loved being a reporter, liked being an editor and really love being a professor. To see a kid struggle with writing as a freshman and blossom into an amazing storyteller as a junior or senior is perhaps the most rewarding thing ever. And to have them email me and thank me, or ask me to read over a story, even after they leave and before they give it to their editor, that’s just so neat. Makes me feel like I mean something and have left my mark.

Q. What advice or tips do you have for aspiring journalists?

A. Be better at it than the next guy, and that research and reporting are most vital. Social skills are hugely important too, as is compassion. Without good reporting, stories simply won’t be good. When you get a source to forget that you are interviewing them and just chatting, that’s when everything becomes real and the good stuff comes. People always tell me that journalism is dying and there are no jobs, but I always tell students, if you’re good, there are jobs. Recent grads working at the local daily and others at magazines in Boston and Manchester, Vt. prove that.

Q. Is there anything further you would like to tell your readers?

A. Buy the damn book. You’ll like it. I promise. I think it especially resonates with those who value family and like heartfelt stories. It’s like vegetable soup for the heart (terrible pun intended).