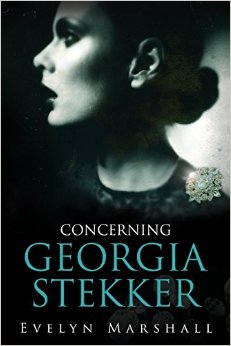 The title character of Evelyn Marshall’s Concerning Georgia Stekker is a physically and intellectually striking girl. Raised by a single mother still bitter over being spurned by Georgia’s father, but determined to provide the best for her child, Georgia is encouraged in her love for classical music and books—even if her myopic obsession with the pieces she loves can come across as a bit odd. But, then, Georgia isn’t like other girls. Besides being strikingly beautiful, with an uncanny ability to garner the attention of all of the men in a room, she is very smart—and unusually determined. She is studious and very focused on her studies, determined to make a place for herself in the world.

That is, until she meets Larry Fuchs—well, re-meets him, really. Originally having been escorted to a mansion party by a seemingly disinterested Larry, who disappeared the entire night and left her on her own, Georgia meets him again while she is attending college (and he, law school) and sparks fly. A charming, handsome, but not too serious, person, Larry is determined to make his way in the world. He doesn’t devote time to his studies, but is somehow convinced that he will pull through in the end, even if he graduates nowhere near the top of his class. Because he will move up in the world, and he will have the money he desires. Because, you see, Larry, like Georgia, is from humble origins. Unlike Georgia, however, he skates by his charm and good looks rather than deeply applying himself.

This is why it should have come to no surprise to Georgia when, upon graduating from law school, Larry informs her that their time together, the three years they spent in a love nest, casually planning for the future, has come to an end—and that he is marrying someone else. Someone, of course, whose father is a partner in a prestigious law firm, someone who can help Larry achieve his goals. Georgia, devastated because of her myopic passion, her ability to love one thing completely, falls apart. That is, until she meets Lavelle, an embittered older woman with a husband very much like Larry Fuchs, a scheming, swindling, social claiming leech for whom women provide status more than anything else. And between Georgia and Lavelle, a plan is born.

It is at this point in the novel that Concerning Georgia Stekker becomes, in a way, almost a riff on Dickens’ Great Expectations, with Lavelle playing Miss Havisham to Georgia’s Estella. The women con slimy, scheming men, leading them to financial ruin, in order to seek revenge on the men who have hurt them. But for Georgia, that isn’t enough. As great as her conquests, it’s Larry she wants to hurt. And Larry who becomes the sole focus of her wrath.

Concerning Georgia Stekker has an interesting premise, partially focused on the manner in which one huge betrayal can alter the course of a person’s life, can change them, but it’s also frustrating as a reader to see the title character become so embittered over someone who is so clearly not worth her attention, regardless of his charms, to see the weak, pathetic man warp the strong woman and make her weaker than he ever was, regardless of how adeptly she uses her powers of seduction to take vengeance on men like him. The novel is full of dialogue that often seems a bit stiff and unrealistic, and Georgia’s impact on men is not entirely believable. But it’s entertaining and Evelyn Marshall has clearly thought out her characters and her plot. The issue is really whether one cares to read about a promising young woman focusing her life on getting revenge on someone stupid, shallow, and boring.