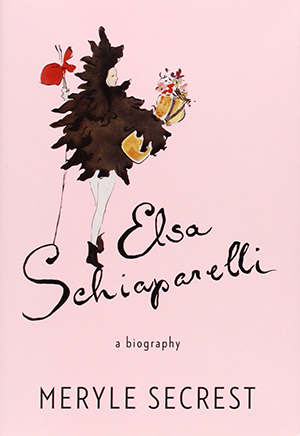 Meryle Secrest’s Elsa Schiaparelli tells the story of Surrealist fashion designer and early 20th century celebrity Elsa Schiaparelli. Although, the designer’s star shined extremely brightly in the early 20th century, the suspicion of collaboration with the Germans after the Second World War brought down her career, and unlike her contemporary Chanel, her memory has largely faded from the present day. Schiaparelli was born the daughter of a wealthy Italian intellectual (astronomy buffs may remember an uncle who claimed to discover canals on Mars), and left her home as an older adolescent to avoid an arranged marriage. This begins a peripatetic life of living on a constant fountain of ideas, making do, and movement. Schiaparelli meets the leading lights of her day-artists like Dali, Picasso; movie stars like Garbo, Dietrich and Katherine Hepburn; and European royalty like the Duke of Windsor.

Secrest is a practiced biographer, and this early 20th century period is a time she has visited before, with volumes on Kenneth Clark, Frank Lloyd Wright and Leonard Bernstein just to name a few. The familiarity with the period shows on the page, with easy references to the people in the story, which may be less familiar names to readers lacking background in the period. The volumes are illustrated with a number of pictures, so readers don’t necessarily need to have fashion background to enjoy this biography. This volume will especially appeal to readers with an interest in the period, or readers with a previous interest in Schiaparelli and her circle. Secrest has tried to uncover the truth as far as possible about the famously evasive designer’s movements and motives, and while the book still feels very polished and reads very easily, it may be a more complete accounting of an incredible life than anything that has come before it.