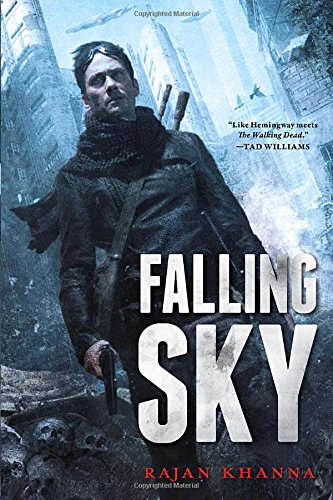 A strong beginning to a post-apocalyptic series, Falling Sky takes the zombie plague to a steampunk, airship-filled future. When the Bug first started to spread, humanity soon realized the safest place was in the sky. Ben Gold ekes out a living by scavenging the ruins of earth, and hiring himself out for protection duty to a group of boffins (scientists intent on finding a cure for the Bug). However, few survivors are so high-minded, and Ben barely survives an attack from the nearby, and newly violent, city of Gastown. Determined to retrieve his stolen airship, Ben stumbles across a terrifying plot and must make a choice. Does he run, as his instincts are screaming at him to do, or does he make a stand to protect the last sliver of hope humanity has?

“I’m halfway to the exit when I see the Feral. It’s lying on the floor blood pooling around it. But it’s not dead. It’s squirming, weak from the loss of blood, its eyes wild. I don’t need to kill it. Nature will do that for it. But I can’t risk it lashing out at me, or shaking a drop of blood at me, so I stop and fire three bullets into its head, knowing that the gunshots will likely alert any raiders nearby.”

Rajan Khanna has created an engaging and enjoyable post-apocalyptic world in his book Falling Sky. Rajan’s world is incredibly real and remarkably detailed, from the descriptions of a salvage run to the emotional cost paid by the survivors. All characters are beautifully rendered, making it easy for readers to care deeply about their plight, but also manages to not get too bogged down in touchy-feely sentimentality. The zombie mythology has been tweaked in several ways that makes this book feel fresh, and helps it to stand out from the horde of other books using that theme. Falling Sky is a bit of a genre mash, and could easily appeal to science fiction, steampunk, action adventure and the occasional horror fans alike. Definitely worth the read!