Flight of the Golden Harpy by Susan Klaus 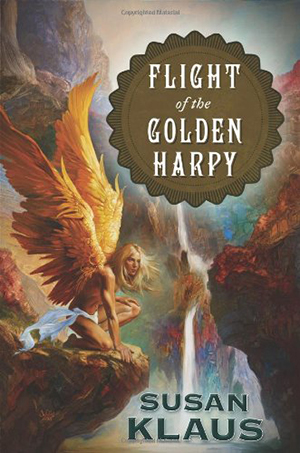 Flight of the Golden Harpy is the story of the world of Dora, a wild planet to which humans have recently migrated. It’s lush jungles harbor dangerous plants and creatures, most infamous of them all is the harpy – a race of creatures that are half human and half bird. Kari had been raised on the stories of the dangerous harpies that would kidnap human women for wives – destroying their mind in the process. However, as a small child Kari was rescued by a rare golden harpy and she can’t quite believe the harpies are the monsters everyone seems to think they are. When the harpy from Kari’s childhood is captured by some local hunters, she uses some quick thinking to rescue him. Now saddled with an injured harpy, Kari learns there is so much more to the elusive and mysterious race. Decades of harpy hunting and misunderstandings have made a peaceful coexistence impossible, but when the local beetle population suddenly develops a taste for human flesh, the harpies may be the only chance humanity has.

“I’ve never felt so much rage in him. Right now he’s willing ot risk his male flock and attack every human on the planet. This is what he fears and why he’d rather die. Shail is a full-blooded harpy and lives in the present like all animals.”

Flight of the Golden Harpy has a terrific summary, and the core idea was a good one. However, the book fails to live up to its potential. The most obvious problem readers will see when starting this book is the overly stilted and clipped writing style. The dialogue is painful to read, and there is nothing natural in the way the characters speak to each other. There is also no differentiation between when the characters are speaking, and when they are talking mind to mind (the primary form of communication between harpies) which can make following a conversation even more difficult.

The relationship between Kari and her harpy Shail is complicated and actually quite creepy. To begin with Kari treats Shail as a troublesome pet, to the extent of patting his head and calling him a “good boy.” This makes it incredibly strange and uncomfortable when their relationship quickly delves into a physical romance and Kari is still treating Shail like a slightly intelligent animal – even calling him an animal on numerous occasions throughout the entirety of the book. It is also strongly implied that a portion of their attraction to each other is due to subtle brainwashing that Shail directs at Kari after he decided to claim her as his own, making their relationship more of coercion than a “falling in love despite all odds.”

Kari is severely disappointing as a main character, as she quickly loses any sense of agency. While she begins the book with strong opinions on the mistreatment of harpies, she quickly backs down against confrontations, and devolves from an active heroine to a damsel in distress trope. In fact, all female characters in this book are weak and let the men (and male harpies) around them dictate their life directions and goals – with female harpies on the extreme end as they go crazy and die if their mate perishes.

Despite having lofty goals about telling a cross-species romance amidst adventure, danger, and prejudices, Susan Klaus failed to make Flight of the Golden Harpy into any sort of substantial fantasy narrative. If you’re a fan of fantasy and are drawn to this book by its premise or the shiny cover, don’t be fooled, and get your fix elsewhere.