GI Brides: The Wartime Girls Who Crossed the Atlantic for Love by Duncan Barrett and Nuala Calvi 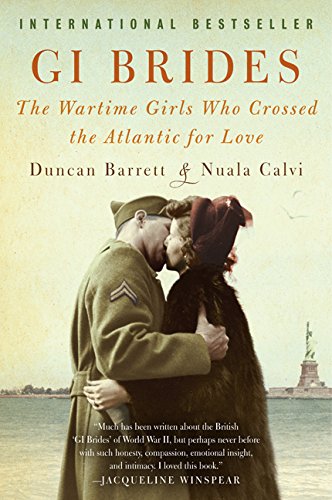 Duncan Barrett and Nuala Calvi’s GI Brides tells the story of young English women who married American GI’s that they met during the second World War, when thousands of young soldiers passed through England on their way to the European theater. Barrett and Calvi do a good job of depicting the conditions in England during the war, as well as the way the Americans seem like exotic outsiders. Each of the women is a fully realized human being, not a cardboard cutout or romantic idol, and their reactions to their sometimes difficult situations after the war bring this into focus. The majority of the book focuses on the lives these women created for themselves in the US after the war. Some of the women married soldiers who changed dramatically after the war, while other struggled with smaller clashes in personality and culture. Either way this book is quick, highly readable, and definitely recommended for fans of historical fiction from this period.