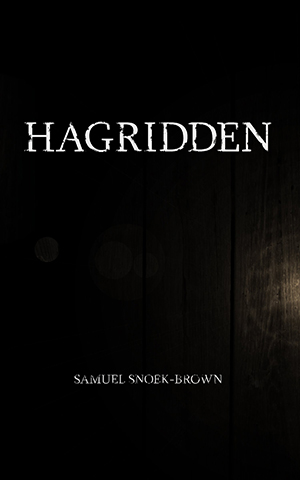 Set deep in a Louisiana bayou, Samuel Snoek-Brown’s Hagridden examines the struggle of two women to survive in what is left of the South as the Civil War grinds to a bloody close. They’ve learned the bayou’s secrets and it’s served them well, but in the end, the bayou has no allegiances.

Hagridden‘s strength is undoubtedly the landscape, described to painstaking detail and always considered first in any scene. The novel takes advantage of the many textures which exist within southern swampland to give tangibility to the words, allowing the reader to experience the bayou in all its muddy, slimy glory.

However, the other story elements fall far short of the mark. The quasi-ghost story should be engaging, but it’s mired in heavy-handed prose that relies on archaic syntax and graphic descriptions of bodily functions, as well as gratuitous vulgarity, to lend gravitas to a story where the characters are empty of character. Many scenes amount to a study in useless stage direction, in which the author attempts to describe everything that transpires and therefore obscures the truly interesting or meaningful parts of a scene. Readers may be frustrated by the step-by-step descriptions of mundane processes only tangential to the plot.

The author appears to have made certain stylistic choices in an effort to give the novel a literary presentation. The two women who are ostensibly the main characters – they’re the ones mentioned in the blurb on the back of the book- – never receive names, even though every other character does. Perhaps it is worth noting that all the named characters are men. This reviewer also can’t forgive the author’s choice to omit quotation marks, something that not even James Joyce could truly get away with. Readers should be prepared to puzzle out the dialogue, often buried in other description.

While the elements of an engrossing story are present, the execution of Hagridden is in the end disappointing. It would, perhaps, be better off as a screenplay; lifted from the worst of the prose, it would make a beautiful dark film.