How to Ruin a Queen: Marie Antoinette and the Diamond Necklace Affair by Jonathan Beckman 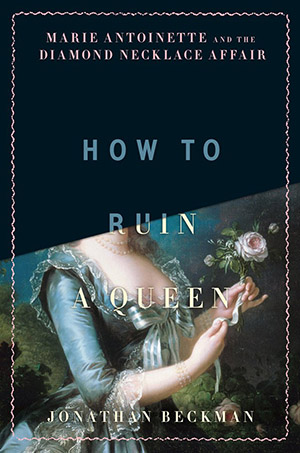 Jonathan Beckman’s How to Ruin A Queen is a detailed account of scandal, politics and intrigue in the lead up to the French Revolution. Beckman lays out the step-by-step details of the “Diamond Necklace Affair,” a plot by Jeanne La Motte-Valois, a woman who claimed to be one of the last scions of the Valois royal line of France. Although Jeanne grew up penniless and in an extremely violent and abusive situation, she was constantly impressed with the importance of her bloodline, and the rights to which she was entitled. As she entered adulthood, she lied, cheated and schemed her way into many of those rights, including a pension from the king. The Diamond Necklace Affair was the pinnacle of these, as Jeanne used her friendship and patronage from the Cardinal de Rohan to buy a fabulously expensive diamond necklace, supposedly for the queen, to finance her lavish lifestyle. The repercussions of this crime quickly spin out of control, with suspicion falling on the queen herself, and ultimately having echoes that reverberate into the Revolution.

Beckman does a good job of balancing between his historical tale and historical fact. Much of the primary source documentation for this period is wildly inflated or written years after the fact, and history buffs will appreciate the fact that these instances are footnoted, and the mostly likely historical course is highlighted. The story also does not quite read as a novel. Readers looking for a novel could likely find a more exciting version elsewhere. However, for a clear, captivating historical account, readers could not do much better than Beckman’s book, even if there is slightly less of Marie Antoinette than the title promises.