I Am Malala: How One Girl Stood Up for Education and Changed the World by Malala Yousafzai 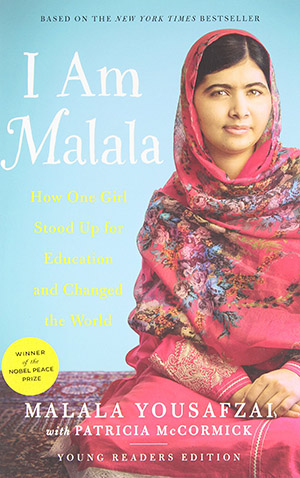 I am Malala is inspiration-filled as you learn about this wonderful story of a young and very brave girl in Pakistan. Typically women are not educated in Malala’s country, but her father was a progressive educator who believed boys and girls should be educated. When Malala was ten the Taliban began to attack villages that did not follow a strict Muslim lifestyle. Malala was an excellent student who loved to learn, and she was not willing to give up school. At ten, she started a campaign to ensure girls were educated. In October 2012, she was shot while returning home from school. Two other girls were injured, but the shooters wanted to kill Malala for her outspoken passion and influence. After the shooting, Malala and her family moved to Birmingham, England.

“No one was safe in Pakistan. Not the women who were forbidden to walk the streets of their own towns.  Not the men who were being flogged to death for petty reasons. Not the children who worked in the trash heap. Not even the children like me who just wanted to go to school.”

I Am Malala is a book that reminds readers how we take our freedoms for granted. A simple day at school can be a death-defying event as Malala proved. Prepare to be inspired and ultimately hopeful as you read this interesting and detailed look into a young girl’s Pakistani life.