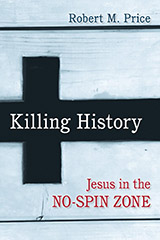 This book is a direct and unstinting critique of another book: Killing Jesus, by Bill O’Reilly and his partner in crime Martin Dugard. It’s the third book of a series beginning with the deaths of Abraham Lincoln and John F. Kennedy. They purport to be the truer versions of these historical events without error, exaggerations or political agenda. This reviewer has not read any of these works because it doubtful that they actually added anything of value to what was already available from other sources. Since Bill O’Reilly is noted for his political leanings, it is hard to believe that he left them at home to do pure scholarship. The author of Killing History suspects the same and proceeds to prove it using genuine knowledge gained over years of scholarship that resulted in two PhDs: one in systematic theology and one in the New Testament.

Robert Price says that he likes Bill O’Reilly and agrees with him most of the time. But Bill just isn’t competent enough to be authoritative; he’s light on research and writes from his belief. The result of which is not history, but “end times fiction.”

Reading Killing History gives insight into just how difficult a subject Bible history is: A story that happened two thousand years ago, written at different times, by many authors in several different languages and different cultures. It’s enough to give you a headache. Fortunately, Dr. Price has an active sense of humor and frequently lightens the prose with humor, particularly in the chapter headings and subheadings. Other than that, it’s pure education. Scripture is used, of course, along with comparisons between the Gospels, More obscure sources that we laypersons are probably not aware of, and commentaries from other scholars who are called upon to add their insights on a particular point. Google can easily assure you of the bonafides and of Dr. Price depth of knowledge. This reviewer found only accuracy and impressive knowledge of the subject at hand.

If you are already satisfied on the question of Biblical inerrancy, you might want to give this book a pass. But if you are genuinely interested in getting it as right as possible, I couldn’t recommend it more highly. In any case, it will make you aware that there are people out to make a buck, who might not treat the story of Jesus, or perhaps any other historical figures, with as much care as you would want.