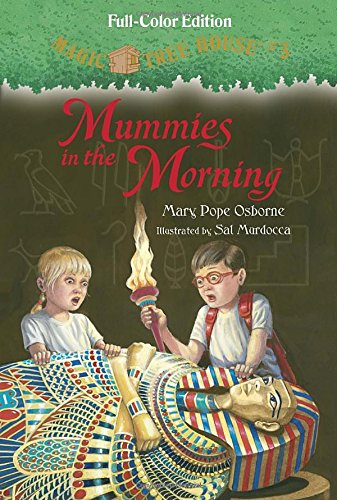 Children’s author Mary Pope Osborne has been taking kids on adventures across the globe and through time with siblings Jack and Annie in the Magic Tree House series for more than 20 years. As with the first two books in the series – Dinosaurs in the Dark and The Knight at Dawn – the third book Mummies in the Morning, originally published in 1993, has been re-released in hardcover as a full-color edition.

Featuring new artwork from series illustrator Sal Murdocca, Mummies in the Morning follows Jack and Annie to ancient Egypt in an exciting, information-packed story for older elementary-aged children that mixes history and fantasy. Jack and Annie find themselves in a pyramid at the aid of the ghost of Hutepi, Queen of the Nile. She needs their help in finding the Book of the Dead so that she may move on to the afterlife. Will they succeed? With the illustrations in the original books in black and white, the new color illustrations make the story more exciting and vivid. Also in this new edition, Osborne includes several example pages from the nonfiction Fact Tracker companion to Mummies in the Morning, Mummies and Pyramids, teaching readers more detail about the Nile River, temples, the moon god Thoth, and how the pyramids were built.