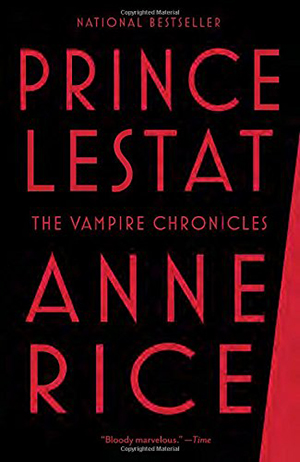 Prince Lestat is the most recent novel in Anne Rice’s Vampire Chronicles. The novel once again follows the vampire Lestat, filling in various pieces in time previously left uncovered in the earlier books and building up to the newest crisis facing the vampires. All over the world vampires are being destroyed. The burnings are reminiscent of the killings perpetrated by Akasha years before, but no one seems to know who is behind it. Meanwhile, numerous vampires are being contacted by a mysterious Voice, and it soon becomes clear that the Voice is behind the burnings. Lestat and those closest to him search for the identity of the Voice and come to a terrifying conclusion.

The main thing this book did right was to completely ignore the events that happened in the witches’ crossover books (Blackwood Farm and Blood Canticle)—books that had cost Rice many longtime fans. The whole cast is back, dealing with the fallout from Akasha’s death that was years in coming. Lestat is once again the impulsive and selfish Brat Prince we knew and loved, and yet he is finally showing some maturity in his actions. This time his evolution keeps in line with his character, and doesn’t destroy his central personality.

“I was sick with worry for those who were dying. It was not all fledglings and the misbegotten. Many of the three- and four-hundred-year-old Children of Darkness were being slaughtered. Perhaps some of those I had known and loved on my long journey had been slaughtered, lost to me and to everyone else forever. When Akasha had gone on her rampage, her great Burning, she’d spared those connected to me, out of favor, but this new Burning seemed infinitely more terrible, more random. And I could not guess, any more than anyone else, who or what lay behind the devastation.”

The book begins with an extensive (really and truly extensive) summary of the events in previous books. This might be annoying for someone who has recently read the Vampire Chronicles in its entirety, but is a great refresher if it’s been a few years since the last time you read the series. The book also includes the entire cast of Rice’s vampires. Seriously. Everyone. It’s a lot of names to keep straight, and several of the cast members are from the Rice’s other books, or the ones that fall outside of the main canon. For readers who haven’t read Vittorio or Pandora for example, you may find yourself at a bit of a loss as far as emotional attachment goes, but it doesn’t lessen the book’s appeal. There is also an Appendix in the back of the book that includes a list of all of the vampire characters in the book as they show up chronologically (not alphabetically) in the history of the Vampire Chronicles, starting with Amel and ending with the newest vampire, Viktor. This can be a huge help for people less familiar with the outliers, but also emphasizes just how many characters there are to keep track of.

Overall Prince Lestat is an enjoyable read. It feels like Anne Rice finally wrote the ending the series deserved. Ok, so there’s actually another book planned, but the series really could end here, and this reviewer would be 100% happy with that.