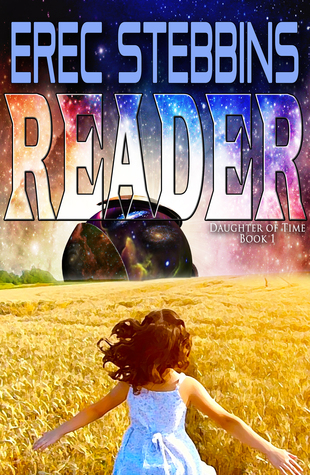 Reader is the first novel in Erec Stebbins’ sprawling philosophical science fiction series of Daughter of Time novels. In this book, Ambra Dawn, a young earth girl with a brain tumor that allows her to see into the past and future – and to change events in human history – is set on a journey that will have massive ramifications for humanity…and, indeed, for all forms of life, human and otherwise. A farm girl living a halcyon existence in spite of the tumor deforming her, Ambra is taken by shadowy figures, her parents murdered brutally. Ambra is held prisoner and experimented on, her tumor enlarged to increase her visions, her power. Eventually falling into the hands of the Dram, a nefarious alien sect who torture and discard humans, using them only for their psychic abilities – their abilities to read the future, to alter spacetime – and also under the power of the Xix, an advanced and more humane alien species.

Erec Stebbins is a truly strong writer and Reader showcases both his literary chops and scientific knowledge (he’s a biomedical researcher by day). The novel, however, is more than just a science fiction tale; it is philosophical and spiritual, and it explores the nature of fanaticism and salvation – and the cost of both. Yet somehow, in spite of Stebbins’ prowess and the powerful story, the novel seems to occasionally become bogged down by minutiae and moves relatively slowly. But it is certainly worth reading, as is Writer, the next novel in the series.