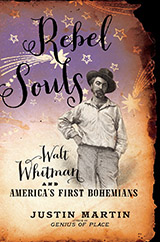 Their Spirit Lives On

Steeped in the history of the Civil War, author Justin Martin completely captures the spirit of these Rebel Souls in his book, aptly subtitled, Walt Whitman and America’s First Bohemians. Under the cloaked invite of a character himself, (née Bohemian), Mr. Henry Clapp, Jr., this “gaggle” of nonconformists, including Walt Whitman, regularly gathered at the now infamous Pfaff’s Restaurant and Lager Beer Saloon below the sidewalks at 647 Broadway in New York. While Clapp may have been drawn to Pfaff’s for their cheap “3 cents a cup, strong and thick” coffee, a reminder of his glory days spent in Paris, he remained for the bawdy atmosphere he was so cliquishly creating.

Oh, to sit at that table at Pfaffs! I mean, who in this era would give his own play a bad review? One of Clapp’s Bohemians did. This captured in Clapp’s very own publication, The Saturday Press, which would become not only the “cultural zeitgeist” of Bohemians, but also the vehicle Clapp used to sing his praises for the works of the less critically acclaimed Walt Whitman. Save for a brief endorsement of Whitman’s poetry by none other than Ralph Waldo Emerson, which Whitman boldly takes upon himself to publish such endorsement upon the spine of one of his several editions of Leaves of Grass, Clapp was forever trying to establish the man as the “poet for all ages.”

Justin Martin’s flair for writing befits this Bohemian culture with his phrasing such as “soldiers outfitted in wildly un-uniform uniforms “ or “Charlie Brown was tall and lanky, a gaggle of limbs, stretching out of sleeves, extending below pant cuffs.” Just love the author’s definition of Bohemianism, which at 66 words in length is better read from Chapter One than to quote here directly. We are ultimately introduced to many characters we hadn’t yet known but who soon become intimately familiar. There is Artemus Ward, Ada Clare,and Fitz Hugh Ludlow. Then there are the more famous souls such as President Abraham Lincoln, John Wilkes Booth and Mark Twain. Soon we are following their stories as they intertwine and connect among themselves.

If one could criticize this book it would be that the ending just seems to just drop, as if it fell of a cliff. It is not neatly tied up in a bow like most of the other lives of the Rebel Souls that we meet. But maybe that’s the author’s way of leaving us wanting more.  As one writer quoted in this book says, “one can tell that this work was lived before it was written.” The same can be said of Justin Martin’s work on Rebel Souls. It comes alive. It’s just too good to miss.