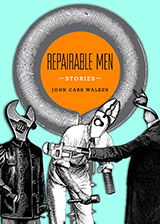 Reattaching the Pieces with Repairable Men

Repairable Men: Stories, by John Carr Walker, is a collection of ten short stories focusing on the lives and relationships of breaking, or already broken, men. The title becomes clear after the first couple of stories: all of these men are trying to repair their lives – or at least what’s left of them. Some succeed; others do not. These men, living out their mundane lives in rural Midwest America, are trapped in one way or another. Whether it’s seen through dull routine, fading relationships, tragic pasts, or strange obsessions, each man portrayed is holding onto something he’s not ready to let go of. Each story is just as compelling as the rest, egging the reader to turn the page and see what will happen to these men next.

In the telling of these tales, Walker shows how well he knows his craft. He does not bog his tales down with bulky descriptions and pointless plot lines, nor does he leave the reader wanting more meat in each of his stories. Walker sets up clear, distinct settings and introduces the reader to characters who are almost lifelike. It is clear right off the bat that Walker has a great eye for detail in the way he writes characters, such as Atlas’s nervous habits and Major’s strange interactions. The strongest stories are “The Atlas Show” and “Retreat”, and Walker proves in “Brother Rhino” that a compelling tale can be told in only a dozen or so paragraphs alone. While the stories do focus strongly on men and their situations, Walker’s story “Pups”, told from the perspective of a wife watching her husband go through a midlife crisis of sorts, is perhaps the strongest by far. There is still the element of a man hoping to repair himself, but told from an entirely different point of view with almost an eerie element in the wife’s eventual actions. All in all, Repairable Men contains heartbreak and healing, just as it contains murders of crows, Vietnam flashbacks, ex-weightlifting champions, and even a couple wolves. This collection of short stories is not to be missed.