Some Luck by Jane Smiley 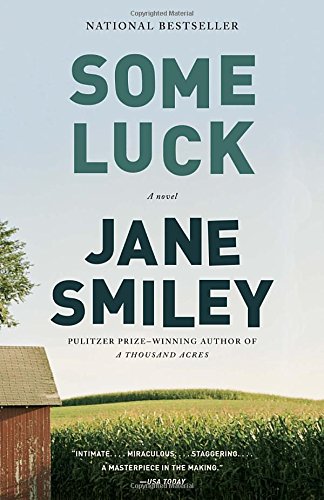 Some Luck tells the “up and down” story of the Langdon family as they live their life on a farm in Iowa. As expected, life is difficult but also simple at the same time. Each chapter covers a year beginning with 1920 and ending with 1953. Rosanna and Walter Langdon raise five children and work through the Depression and unpredictable corn prices. Frank, the oldest son, fights in WWII. Joe loves someone that doesn’t love him and Lillian’s big ambitions fly away when she meets someone and within days leaves for New York and gets married. Henry is mysterious and Claire is still a baby.

Smiley adeptly conveys how Rosanna loves each of her children, but certainly has favorites. The story is told with molasses-slow details with no earth shattering events. But the reader can feel the hurt, frustration, love, and confusion of each of the characters. Although this book is not alarming, the reader truly connects to the characters and learns how tough farm life was in the early and mid-1900’s.