Spanners: The Fountain of Youth by Jonathan Maas 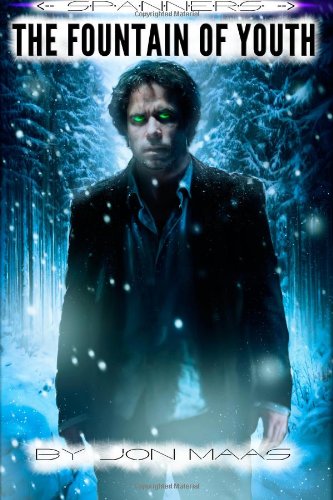 Spanners: The Fountain of Youth introduces a world similar to our own, with the addition of a race of beings called Spanners that live their lives with very different rules from our own. Some spanners die after falling in love only to be born again, some live their lives backwards, and others are immortal. One such immortal, Adam Parr, has caught wind that a dangerous and very old foe is back in the game. Captain Juan Ponce de Leon is gathering a crew to go after the prize that slipped through his fingers 500 years ago: the Fountain of Youth. The Fountain is a powerful and innocent immortal with the ability to grant eternal life, and a final death. With 6 billion lives in the balance, Adam gathers his own team together in a desperate bid to stop Juan from extracting the powers of the Fountain for his own use.

Jon Maas created a complicated world in this book, introducing readers to a seemingly unending number of spanner classes right from the start. The book almost reads like a superhero novel, as so many of the classes have abilities along those lines (immortality, hyper intelligence, fire manipulation, and the ability to change their own biological structures to name a few). There didn’t seem to be any particular rules governing the abilities, and it wasn’t ever made clear if Spanners were a separate species altogether, or if they sprouted randomly here and there from within humanity.

Spanners has a fairly large cast of characters, with readers spending the most time getting to know Adam Parr and Mayfly. Despite the large amount of time readers get to reside within the characters’ heads, it is difficult to empathize with them. All of the characters come across as very flat, with little to no individual personality. We are told what they like, fear, love to do, and yet there remains some strange emotional disconnect, almost like reading the lines of a script. This is interesting as Jon Maas has actually written the script for a movie in the Spanners universe, which may have had a large impact on his style of writing in this novel.

Despite the lack of character depth, and somewhat choppy story, the book moves quickly and does keep the reader wondering how things will work out throughout the book. Spanners, people that live lives backwards and different to our own is an interesting concept, and worth a look for readers enjoy plot driven narratives.