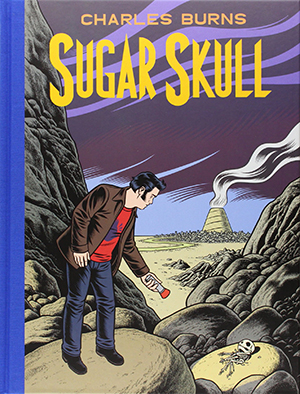 Sugar Skull is the third and final installment in Charles Burns’s X’ed Out trilogy. The book finishes the story of Doug as he navigates two increasingly strange intertwined realities. Since Burns never intended for the series to be released in a single volume, Sugar Skull represents its complete form.

Burns’s style is surreal, mixing childhood adventure stories with the original American punk scene and twisted body horror in a bizarre but hauntingly beautiful way. This is most certainly not a book for the squeamish or easily unsettled. While it does contain mature themes such as domestic violence, abusive relationships, and addiction, Sugar Skull is the type of book that has the potential to change a teenager’s life and make a diehard graphic novel fan out of a casual reader.

The whole series is wild from start to finish, and it’s definitely worth picking up the whole set just to have time to savor Burns’ tragic story and terrifying illustrations. It’s a great choice for both the seasoned consumer of weird comic art and the gutsy newbie looking to get thrown headfirst into a great graphic novel.