Teach Yourself Accents: The British Isles: A Handbook for Young Actors and Speakers by Robert Blumenfeld 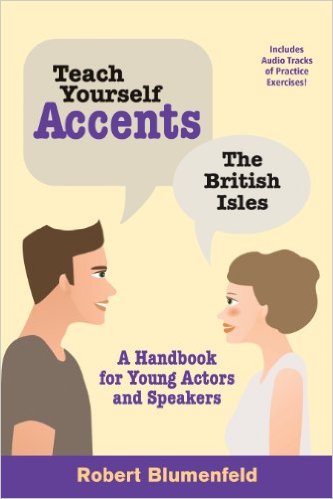 Teach Yourself Accents: The British Isles by Robert Blumenfeld is the first in a series for actors to train themselves to speak accents authentically. The introduction to the book provides basic guidelines that are to-the-point and across-the-board, such as the four components of accents, and the importance of the sounds l and r. These rules make the prospect of learning an accent less daunting and more thrilling.

Each chapter highlights how the four components influence the accents treated there, and what to especially watch out for. The diversity of the English language just within the British Isles is fun to learn as well as humbling.

The book needs to have a symbol next to the parts of the text that have corresponding audio. It is not obvious that some parts of the text have an audio component, and conversely, the monologues and scenes provided do not have matching audio which is a letdown. The practice exercises always have audio but there is no pause for repetition, rendering them difficult to practice anything except listening.

As a manual, Teach Yourself Accents: The British Isles covers all the steps on the way to mastery, and is replete with textual examples, but must be supplemented with film viewing and more audio.