The Brickmaker’s Bride by Judith Miller 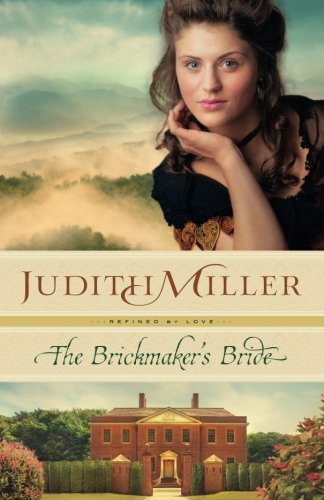 In this engaging historical novel, The Brickmaker’s Bride, Ewan McKay becomes an unlikely hero in the story. Set during post-Civil War years, in West Virginia, he is an Irish Catholic immigrant trying to make a new life for himself with a little help from his alcoholic uncle, Hugh Crothers. They are set to buy a brickyard where Ewan hopes to rebuild the brick making business in this area. Ewan aspires to earn enough money to purchase travel passage for his three younger sisters to begin their new lives in West Virginia with him. His arrogant Aunt Margaret tries to thwart his every advance. He meets the beautiful daughter of the original owner of the brickyard, Laura. She proves to be quite the challenge for him as he learns the business side of the brick operation from her. He finds her intriguing and is very attracted to her.

When Uncle Hugh seems to lose interest in the business, Ewan finds his refuge in prayer. He struggles to keep the brickyard running and keeping his family together.

The experienced author Judith Miller has written an intriguing story of love, betrayal, greed, heartbreak, and faith. Her attention to detail is very evident in this story. She gave beautiful descriptions of the upscale homes built in that era. Judith Miller also did extensive research in the production of brick making during that era. Her story flowed with the grace of the long flowing gowns of the Civil War.