The Garden of Letters Alyson Richman 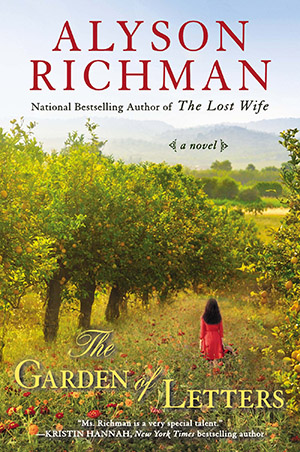 World War II in Europe was a time when every dream disappeared. Every desire evaporated, replaced by despair and survival. Fascist Italy was frightening. A land created with passionate and creative people facing days of Hitler’s rule forced people, like the protagonist in this story, into a life where they lost their very soul.

The Garden of Letters follows a young woman named Elodie who had a life as a gifted cello player during the uprising of Fascism and the rebellion which went along with it. As the world around Elodie is destroyed she attempts to escape her home and become a woman named Anna. Angelo is a widowed doctor in Portofino who goes to the dock once a month to save the most frightened person whom he knows will likely have forged papers. Elodie is the one who he sees this time and his own life is changed with his encounter with her. This is not a typical love story, but one describing the love for the passion within each of us for what we love to do.

Much of the story describes the character’s life previously and goes back and forth between time frames of their life, and the viewpoint of their family. Parts of the story are difficult to follow because there is often no distinction between whose point of view the story is being told from. Although it is hard to make the emotional switch so often between characters and time frames, the book instills an emotional journey and has a sweet ending allowing two people to find peace and comfort.