The God of Sno Cone Blue by Marcia Coffey Turnquist 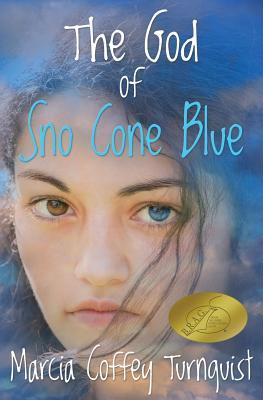 Grace is a preacher’s daughter. Living in a small Oregon town with her mother, father and little brother, Grace’s life, while not perfect, is pretty close to ideal. The only thing truly irregular being her mismatched eyes, one bright blue and the other brown. There are, of course, other things that aren’t perfect: the dark moods that overtake her mother from time to time, bouts of depression of which Grace cannot trace the roots, and some backwoods classmates who do their damnedest to make Grace’s life difficult. Other than that, than the occasional mischief and drama of childhood, Grace’s life is pretty great. Unfortunately, that all comes to an end when Grace’s young mother is stricken with cancer and dies. Lost and frustrated, Grace’s world is further confused when she begins receiving letters from her mother, letters that tell a story that Grace needs to hear – and that she never could have imagined.

Told from the perspective of an adult Grace, Marcia Coffey Turnquist’s debut novel, The God of Sno Cone Blue, is an honest meditation on childhood, loss and the secrets we learn about our parents, both during and after their lifetimes. As Grace receives each numbered letter from her mother, telling piecemeal the story of her mother’s life, how her parents met, she grows more and more desperate to learn about the woman she had previously seen as just her mother but is coming to recognize as in independent person with her own hopes and dreams – and peccadillos. Navigating adolescence without a mother and with growing resentment towards everything she feels she is expected to be, Grace’s mother’s letters, the slow, painful unraveling of her story, serve to teach Grace not only about her mother as a human being, but also to teach her a lesson – but one the gravity of which she never could have imagined

The premise of this novel – star-crossed love that ends in pregnancy and tragedy and the redemption of one of the lovers – could, in the hands of a less skilled author, easily devolve into cliché, but Coffey Turnquist has the chops to keep the story moving, keep it feeling fresh, and to mostly avoid the pitfalls of over-sentimentality that are often inherent in these sorts of novels. While The God of Sno Cone Blue does on occasion skate close to the cloying sentimentalism that can bring down a literary ship. But Coffey Turnquist – and her narrator Grace – manage to save the novel from going down that road, and even if the book’s final conclusion may seem a bit too syrupy sweet in spite of all of its tragedy, the novel’s ultimate lessons about love, youth and family ring true – and do so loudly, with pride and with undeniable force.