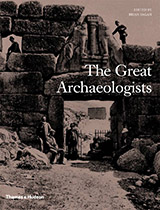 Archaeology is a surprisingly new science, exploring a prehistoric world barely imagined two centuries ago. While today we wonder if we have time to answer emails or go to the gym, men and women  (indeed, several women) shrugged off discomfort and isolation, packed up regardless of danger and privations and ventured to challenging destinations to satisfy their curiosity.

In editing The Great Archaeologists, Brian Fagan has chosen writers to describe the adventurers and their discoveries in the ancient Middle East, the far older reaches of East Africa, complex civilizations of Central and South America and unexpected revelations in Asia and Europe’s past. Now, even as we think we’ve reached the limit chronologically and geographically, archaeologists are probing the ocean, crawling through ships that failed to return to shore in past generations.

Archaeology, not a universally popular subject, comes to life with the ingenuity, likeability and often quirkiness of the adventurers. Howard Carter, on the brink of finding Tutankhamun’s tomb, wisely installed electric lighting and provided shelter for the workers’ donkeys. Flinders Petrie tackled the Great Pyramid at Giza in his underwear to combat the sweltering heat and no less to scare away the tourists.

The text is divided into six sections addressing different perspectives of prehistoric finds. A portrait and images of the sites complement the archaeologists’ professional and personal descriptions. The book is definitely a “keeper” rather than a short library loan.