The Heroes of Ravenford:Book 1: The Ruins on Stone Hill by F. P. Spirit 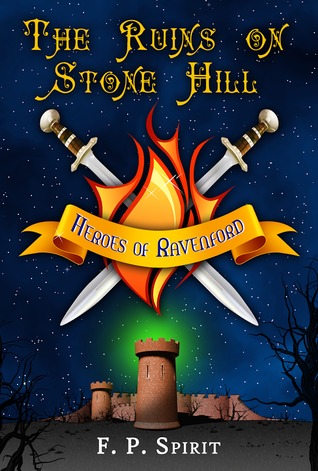 F.P. Spirit’s book The Heroes of Ravenford: Book One: The Ruins on Stone Hill feels a lot like what would happen if someone decided to novelize the RPG they were playing. The Heroes, a motley band of creatures and men from the realm of Thac, are sent on (or meander into) quest after quest with no real higher objective, in fact the only overarching plot in this book surrounds the group settling on a name for themselves. The action, though there is plenty, feels less important than how the members of the team work together, the choices they make, and how they react to each other’s roles. For a pure fantasy story, however, you can’t really go wrong with this formula, and it will likely appeal greatly to younger teens obsessed with video games and RPGs who crave more narrative than those games provide.

The world building in the book leans heavily on familiar pillars of the genre, but is generally much less dark. The main characters pride themselves on working together with races unlike their own, which doesn’t stop them from doing battle with the designated evil creatures (the orcs and bugbears didn’t get the tolerance memo), though they make a concerted effort not to kill senselessly. The only thing that really rubbed this reviewer the wrong way about the story was that there are only a small handful of female characters in multiple kingdoms over three hundred pages, and not one of them contributes anything to the story other than sex appeal. The tone and pacing of the book are so inviting and easy to get into, why not make girls feel welcome to explore the world too?

The Heroes of Ravenford is first and foremost a story about friendship and teamwork, where each member of the squad helps the others work through their personal and professional challenges. The author handles many points of view deftly and without missing a beat, and the story moves forward easily. This book is an excellent introduction to the heroic fantasy genre for young fans-to-be.