The Humem State: The Emergence and Establishment of Our Extended Presence by Alan Brook 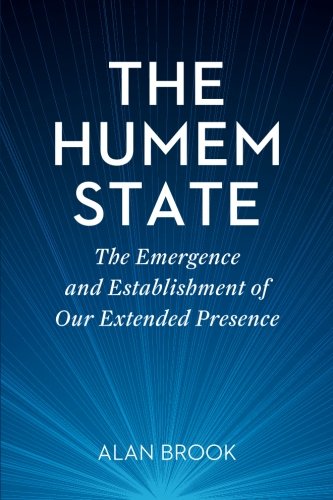 Alan Brook takes on a fascinating and complex concept in his book The Humem State. In the prologue and first two chapters of the book, Brook utilizes the format of a thesis to discuss his premise, definitions, approach and essential points. He explains what he calls the “extended presence,” or EP, of individuals that occur regularly particularly through one’s use of online technology. He details how social media and other online formats expand the scope of one’s visibility in the world.

To separate the formation of the EP from only current technology, Brook uses the story of Cleopatra, showing how an EP is built even in a world without computers. Cleopatra has an extended presence because she was the ruler of a world power. Even centuries later, she continues to have a presence in the written and visual arts. Commoners in her era were less influential or well known and therefore have an extended presence that may only reach family, friends and neighbors.

“In present environments, humems reside in machines, such as computer systems, and interconnect via existing communication channels, such as the Internet. But unlike a person with a body and brain, a specific machine should not be regarded as the humem itself. Rather, the machine should be considered the transient abode or manifestation of a much more complex and enduring entity.”

The example of Cleopatra’s EP is a prototype of his term “humem”: as EPs become more elaborate and even necessary in our lives, they take on an almost independent life of their own. From this prototype, Brook goes on to assert that our current technology is not the end-all of the “extended presence” because there will continue to be more creative and diverse methods of communication and therefore unknown means of being present in the world. Citing the 1948 United Nations Universal Declaration of Human Rights, he argues that as these methods expand, the EP should be granted similar universal rights and opportunities, such as freedom, welfare and security, as the individual for and from whom it is created. Brook is very thorough in his explanations of and proofs for his premise.

Although the topic, issues and proofs were novel and engaging, the reviewer found the elaboration and wordiness of The Humem State excessive, which may drive some readers away. After reading the book, it will be difficult to view the presence of anyone on social media in the same way.