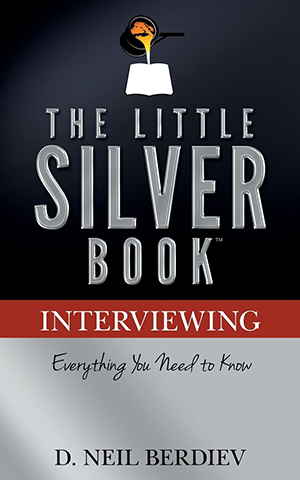 One of the most critical steps in landing a new job is interviewing, an often scary and uncertain process. However, business executive D. Neil Berdiev’s The Little Silver Book: Interviewing attempts to not only demystify the interviewing process, but also help would be job seekers become interview masters.

Broken down into 100 easy to digest chapters, or tips, plus five bonus chapters, this 200 plus page book offers strategies, techniques and action items to implement during your next job-seeking journey. The chapters are grouped into four logical sections; Fundamentals, Before the Interview, During the Interview and After the Interview. Therefore, if you are looking for advice on one of those particular aspects of interviewing you can dive right in instead of having to hunt and peck through the entire book.

The majority of the chapters are no longer than two pages, which makes for quick reading and implementation. While the number of interviewing tips inside this book is impressive the author was definitely not going for depth per tip, a decision that could, however, prove beneficial for those preparing for an impending interview.

“Your family and friends can be instrumental in helping opening doors that will either be closed or that will take a while to get through. What is important is their ability to step out of your way when their job is done to help you do your job in networking, interviewing, and securing employment.”

The bulk of Berdiev’s book is upbeat, positive and direct, however, there was one particular word, “useless,” that jumped out at me on the third page that could prove off putting to some readers. Berdiev explains his inspiration for penning the book, which in part stemmed from him feeling that there was too much “useless” information being given out. The choice to use a more harsh and judgmental word could alienate some of his readers; especially if they have already slogged through the so-called “useless” information he is referencing.

Considering the numerous concentrated scoops of timeless information found nestled inside many of his chapters (such as cover letter etiquette, the importance of being organized during your job search, maintaining eye contact and focus during the interview and overall professional communication) this little book proves to be a valuable source for those navigating the interviewing landscape.

The 100 chapters sail right into the Bonuses section, where you can glean useful information about identifying strengths and weaknesses, leaving a lasting impression and effective networking. However, the book abruptly ends with no final words or summary for the reader, a sharp contrast to the first few pages.

After reading through this interviewing bible in part or in its entirety, you might feel overwhelmed by the sheer number of tips, but landing your next job will likely take implementing more than a handful of the book’s suggested actions. Thankfully, Berdiev’s book will arm you with a business like approach to securing employment, a valuable tool for anyone in the thick of the job hunt.