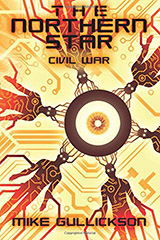 The book, The Northern Star: Civil War, by Mike Gullickson is the second book in a series that takes place around the year 2069. It’s a dark futuristic science-fiction tale about a war beginning to brew between humanity, free will, and greed. Due to oil shortages the need for new resources is evident. Mindlink Corporation has partially filled that need by their technology allowing them to upload the human consciousness into a virtual reality world. They have helped link the minds of soldiers together into a truly spectacular army – a mix of human and machine. But this new technology has also given rise to a force of greed that drives one man to try and control it all. When one biomechanical soldier finds out what’s going on will he be able to save his daughter before a war breaks out?

The book is action packed from the start, getting the readers attention and holding it throughout the story. The plot line is strong and is well conveyed. There is just enough activity in the slow parts that the reader’s attention doesn’t lag, making the book interesting to read and entertaining throughout.

“Those in the physical world disregard the virtual world, and those in cyberspace return the favor. But they are inextricably linked. There is no difference between the two except one: if you control the digital world, you can bring the physical one to its knees. The opposite isn’t true.”

The book is hard to follow if you have not read the first one. The reader could easily become confused and information mixed up without the background and familiarity of the characters that by this point are already pretty well established. The characters first and last names are used interchangeably within a scene and if not paid close attention to, one might think there were a conversation going on between three people instead of two. Like most good sci-fi, information is very convoluted in the very beginning but by the middle of the book there is that definite “ah-ha” moment where everything ties together. The ending leaves you wanting more with a definite opening for a third book. The story shows a grim future and plays up the fears of humans and virtual reality, and the politics behind such a vast system.

There were only a few minor grammar errors that were noted. Narration is appropriate and maintained throughout the book. The author definitely seems knowledgeable in the area of military strategy; politics and robotic/cybernetic network systems and from this information is able to build a very strong standing world within the story. The dialog among characters was natural and flowed well.

Overall this book was a fantastic read and entertaining the whole way through.