The Paradise Tree: A Novel by Elena Maria Vidal 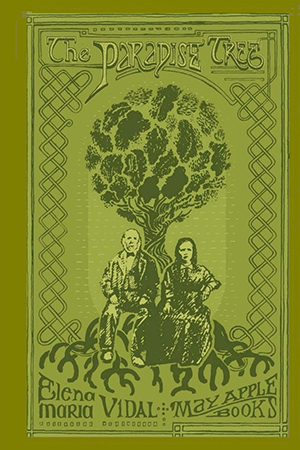 Elena Maria Vidal’s The Paradise Tree is the haunting saga of the O’Connor family. The reader follows the life of blacksmith Daniel O’Connor, an Irish catholic who migrates to Canada in pursuit of economic and religious freedom. O’Connor flees Ireland with a rosebush and the “Paradise Tree,” a wooden crucifix. He begins a new life in Ontario, where he cultivates his home and raises a family in a new world fraught with its own sets problems—some old, some new.

A sprawling historical novel, told from multiple perspectives, The Paradise Tree takes us into the lives of the O’Connor family in a voice that is thorough and rich. Vidal’s writing is sensory and visceral. The reader feels as if she is a member of the O’Connor family, slunk in the corner watching, rooting for the characters, feeling for the characters, and taking on their conflicts, joys, and burdens. We are told the harrowing tale of the O’Connor family in scenes that we feel we are a part of, and when necessary, a narrative voice that moves the story to it’s bittersweet conclusion as we leap along in time with the family.

Vidal’s meticulous research brings the O’Connor’s’ world to life. Lush provocative details enrich the novel instead of distracting from it: “Time for the ceilidh!”…Patrick brought out his bodhran, a wide drum…The general idea of the ceilidh was that each member of the company would contribute to the entertainment of the others with a song, story, a dance, or recitation.” Vidal’s novel is rich with history. She manages to enlighten the reader of the customs, traditions, and folklore of the O’Connor family through factual anecdotes and observations, as well as poetry and song, while moving the story forward instead of bogging us down in showy, didactic details. Whether we are discovering the “shillelagh” wielding “Orangemen,” or sitting down to a goose roasted over a spit and smelling the simmering parsnips on Christmas Eve, we are given a thorough history lesson without the lectures, the notes, and—thank goodness—the exams.

The Paradise Tree does what good novels should. It tells us a story, it shows us what it means to be human—replete with the triumphs, sadness, and conflicts entailed in being human—while whisking us away to another world that is not our own. For 232 pages we are extracted from our lives and into the lives of the O’Connor family. We root for them. We feel their hardships. We feel their connection and disconnection as a family while we are shown a distant time and place, filled with potentially unfamiliar folkways. In the end we are pleasantly reminded that the O’Connors’ story is just as much ours as we traverse the familiar territory of faith, family, and love, and how we still find ourselves dancing in the face of seemingly insurmountable odds.